The Power of a Good Jedi Master Mentor 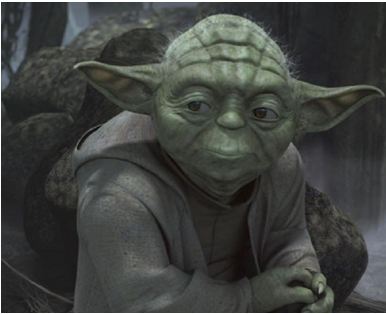 I remember, as a Sales Manager, sitting in my office one day thinking that I may put my head through the wall if I don't change my life.

I was making over six-figures, went on nice company paid-for vacations, drove a nice car, lived in a nice house, had enough money to live ... but I was pissed off with myself.

Just felt like I wasn't living to my full potential.

I had been studying sales, marketing for about 7 years pretty intensely and felt there was more out in the world for me.

I read tons and tons of books and listened to countless audio programs in my car.

Everything that was supposed to be helping me was making me more frustrated ... if that makes any sense.

I felt like I wasn't taking advantage of the all the opportunities I knew were out there.

I'm sure you've been in the same place at some point.

Then, somehow, the universe gave me a little push.

I was reading a marketing newsletter and stumbled into a guy in the U.S. who was helping investors buy properties and he had made a business out of it.

Within 24hrs I was on the phone with him.

Within 7 days Nick and I decided to spend tens of thousands of dollars to buy some of his business processes off of him - without meeting  him in person or seeing any real proof of success.

Within another 7 days, we were in a car driving to the U.S. to visit him.

Three months later we were in business for ourselves.

One month after that we signed up our first client.

But you know what the biggest key to everything has been?

During that first year, this gentleman we stumbled into in the U.S. acted as a mentor for us.

Each week he would fax us some of the things he was working on in his own business.

It's as if we were able to spy on what he was doing and them implement similar processes in our own business.

We can't tell you have valuable that was during our first 24 months on our own.

At the same time, my brother-in-law had started his own business about 3 years earlier.

During each family gathering, I was able to pick his brain on hiring, cash flow management, processes, relationship building.

His process for getting new business.

He was and still is a huge help.

Also at the same time, another friend of mine sold his business, which he started about six years earlier, for multiple seven figures.

Talking to him was also a huge eye-opener.

Next, we paid about $10,000 a year for the first few years to go to conferences in the U.S. where other business owners shared their sales and marketing strategies.

Networking in the hallways with other beginner entrepreneurs was huge for us.

Often someone would make one tiny comment ... one little thing that meant nothing to them at that point .... about how they managed their business or how they dealt with the bank, or how they acquired new customers.

And that little comment would end up being worth thousands and thousands to us.

At one of these conferences a financial planner once shared the process for attracting new clients to his business - we quickly implemented the same thing and it's been worth millions of dollars in revenues to us - seriously.

We were out there looking for help and each of these people showed up in our lives.

Whether each of these people knew it or not ... they acted as mentors for us.

They were our personal Jedi Masters.

And without them, we may not have gotten off the ground.

Looking back over the last six years .... good Mentors ... have been invaluable to us.

Today, if my own son or daughter came up to me and asked for the single best piece of business advice I could give it would be this...

Find someone who is doing what you want to do and learn from them.

Watch what they say.

Watch what they do.

Watch what they don't do.

Finding a good mentor is a HUGE shortcut to success.

They've already made tons of mistakes.  They can save you both time and money.

And don't be cheap about it.

We still have many mentors.

Sometimes you need to pay to hang out with good people - and in our books, there's nothing wrong with that.

Looking back at some of the successes we've both had in real estate and in software sales - the same principles applies.

In sales, I was lucky enough to be working with some true superstars (Kenny, Sam, Ed, Ruben, Brian, Steve, Marc, Chris, Kristine and more) ... these people all offered shortcuts to success in software sales.

She washed sheets, cleaned the rooms and basically did it all.

Our father was flipping properties in Mississauga in the 1980's and during the devastating real estate crash of the early 1990's.

What we learned from them shaped our own investing strategies and we've been able to leverage that to help investors with over $200 Million of their own investments.

If you're looking for a shortcut to success, if shortcuts actually do exist, the one true one we can think of is ....

Going it alone is tough.

Often, when you are starting out in some new adventure you don't even know what you don't know.

You don't know what to ask.

A good mentor will guide you, push you ... steer you around rough waters and sometimes make you do things you don't want to do.

And don't settle for people who aren't accomplishing very much.

You want mentors who are doing things - not just talking about them.

You want a true Jedi Master.

Someone who can lift Luke Skywalker's spaceship from a swamp with the power of their mind.

0 comments on “The Power of a Good Jedi Master Mentor”