Rock Star Inner Circle > Real Estate Investing > Why Do We Always Get It Wrong?

Why Do We Always Get It Wrong? 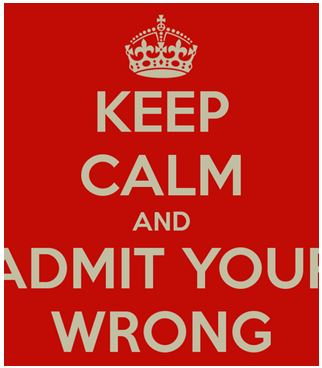 We totally LOVE hanging out with fun people.

Last week we were at an amazing event in Arizona - totally energizing hanging out with super smart, action oriented folk.

During the breaks and at the evening dinners we started sharing stories of how we started and all the mistakes we made.

This lead to Nick and myself going over an entire list of things that we've done wrong.

It turns out we've done A LOT wrong... but luckily we've done just enough right to make our investments and business decisions pay off.

This got me thinking about how our "first decision" is often the wrong one... in almost everything we do.

I'm not talking about your "gut instinct" which is usually right.

I'm talking about the actual thing you ultimately decide is right with your "thinking brain".

It's almost as if "common wisdom" is very bad.

You know how when you're beat down and burnt out the standard advice is often...

"You need to exercise more! You need an outlet to burn off your stress!"

In my life I've learned it's the exact opposite.

Although I love hitting the Crossfit Gym multiple times a week - and I think it's changed my life - I've learned that during these times I don't actually need to exercise, in fact, I need to do the opposite.

I need to get more sleep.

Getting a few nights of 7 hours sleep in a row seems to recharge me more than anything in the world.

(Side Note:  I love the Crossfit thing and highly encourage any A-Type personalities reading this to give it a try... here's our place).

Sticking with the exercise theme...

You know how when you want to lose weight you get similar advice?

Well after meticulously weighing myself for over six months after starting the gym I learned something.

I went from 203 pounds to 195 pounds after hitting the gym pretty hard five times a weeks for three months.

But then a great trainer told me that what you eat makes up 80% of your body type.

So I experimented with what I ate and dropped from 195 pounds to 180 pounds losing a pound a week - with less exercise!

I then got a nasty little Achilles injury that sidelined me for two months and during that time I hardly did anything - and my weight stayed off because of my diet.

I literally did not gain a single pound.

For me, that was a big revelation.

Now when I see people running on a treadmill for sixty minutes a day in an attempt to lose weight I cringe.  (For the record, I did that myself for quite a while.)

This theme carries on to a lot of things in my life.

You know when you're thinking of starting your own business you rush out and design a logo and get 500 business cards?

Nick and I have done that with multiple business ideas.

You end up with a box of business cards and pretty much nothing else.

We once had a "branding consultant" tell us that we needed better branding to grow our business.

Thankfully we ignored him.

He was wrong too.

It turns out without a way to generate phone calls into your business there's not much of a business at all.

There was a time when I wanted to be a highly paid Oracle Database Administrator.

So I thought I should get all the fancy IT designations that I could add to my resume.

Years later I learned that the real money in Oracle Database stuff wasn't actually managing the databases... it was in selling them.

Again, my first idea was wrong.

Here's another example of "wrong thinking":

We need to "hold the good stuff back" and save it for our very best clients.

We should share and give and teach and give some more and that's how you grow you business.

We should be a conduit of good ideas, thought provoking statements and useful information.

That's what we all need.

Thankfully we learned that one pretty quickly and it was in our nature to operate in this way.

Here's something else we've learned...

Nick and I seem to make the most "wrong" decisions in life and in business when we're stressed out.

Or when we're coming from a place of fear.

I'll give you an example:

Several years ago a client ripped into me because he believed that I owed him some real estate leads.

He just blasted me because he felt he was entitled to them.

Now, way back then we didn't have many clients so we were super anxious about losing any.

My first idea was to agree with him and then work like a dog to try and satisfy him.

I didn't want to lose a client after all.

Even though I KNEW that I had done no wrong and that he was being unreasonable.

The next thing that happened was a game changer...

I gathered myself, calmed down, and fired him.

Told him to get lost.

That we didn't work with people who treated us that way.

Don't let the door hit ya on the way out!

And it felt amazing!!

Instead of spending the next few days emotionally destroyed I felt light and free.

My first thought of trying to appease him came from a place of fear.

I was scared to lose a client, when in fact cutting him off was the right decision.

Let's wrap this little rant up with real estate investing...

We would argue that the "standard advice" of trying to time the real estate market with your investments is flat out wrong.

But that's what is constantly shared, "Buy low, sell high!".

Very difficult and in fact, could cost you a lot of time.

Someone once told us that "You don't make money timing the market.  You make money with 'time-in' the market".

Too many beginner investors wait for the perfect time.

When the market is hot they don't buy.

When the market is down they're too scared to buy.

We've learned that if you find a property that produces positive cash flow you might as well grab it.

Because the big money, in real estate, comes not form the monthly cash flow ... but from the equity you build over years of ownership.

And the only way to gain lots of equity is to spend lots of time in the market - owning property.

No one explained that to us.

We may be the only ones that "get it wrong" at first, but we've now learned that "common sense" and "standard advice" is often the exact opposite of what we should be doing.

We now get a kick of running East when everyone else is running West.

Of turning left when everyone else is turning right.

It's like you know a simple life strategy that no one else does.

We'll leave you this week with this Earl Nightingale quote,

"With this in mind, here is a success formula that works even if you do not have success models to follow. Observe what most other people do, and do the opposite."

0 comments on “Why Do We Always Get It Wrong?”