The War You Must Win When Chasing Your Dreams 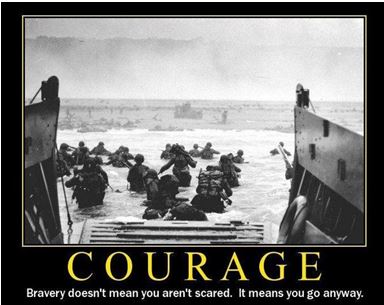 There was blood, sweat and tears.

And it was a dream realized.

He had previous experience flipping properties ... lots of it.

And he had doubters before.

But this was different.

After almost two years of:

Calming down Bank Managers (who controlled the construction loan).

The real battle started after the house was completed.

You see, this wasn't your normal property.

This was a very large, very unique, very different house.

It had hundreds of thousands of dollars in automation.

It had a waterfall next to the family room.

It had a secret passageway.

When this house was completed and listed for sale the Realtors in the area started circling like sharks to give their "expert" opinion.

And it wasn't pretty.

One Realtor, right in front of our friend, told a very very interested Buyer something that amounted to .... "this house will never sell at this price and if you buy it who in their right mind will you ever sell it to".

This was after they went through the house and freely gave negative feedback on almost everything.

They even went out of their way to explain that they could never have their name associated with the sale of this property because the community had never had such an expensive home and they wouldn't be the ones to set the new price record.

All the stress that was endured during the building process was nothing compared to dealing with people pick you apart ... in front of other people even.

This process continued for a few weeks.

And if you've ever had anyone challenge your own opinion, right in the middle of a very intense situation, you know how stressed-out, burnt-out and flat out angry you may get.

And it's not funny.

This is what we all have to deal with.

And let the record show ... he sold that property for more than DOUBLE the closest comparable in the area.

I've never seen him smile like he did that day.

At that moment it was all worth it.  Every bit of it.

If you want to push and stretch and grow yourself - this is the kind of crap you can expect to deal with.

We've continued to go through this fun process ourselves.

When we first started and were stuffing marketing materials in my garage at 10 p.m. in the evening a neighbour walked by and was completely confused by the situation.

When I got up at 4 a.m. to read books (because I had a few other mentors at the time - books became my mentors) friends often ridiculed me.  (I secretly loved the abuse because I felt I was growing and learning)

When we got light headed from licking envelopes to mail out our client packages Nick and I would argue over who could do it faster - it was often 11:30 p.m. or later when we had time for this stuff and we were both exhausted.

Very early on we once ordered $5,000 worth of colour photocopies by mistake ... we didn't realize how much more expensive colour was than black and white ... it almost killed the business.

We used credit lines to stay afloat ... almost six figures worth of them!

I quit my job with my amazing wife at home, a 4-year-old and a newborn ... and a mortgage!!

Can I tell you the looks I got when I announced that decision were not pleasant - not from my family, but from many co-workers.

When we got our first office which was really a broom closet - because that's all we could afford - the Real Estate Brokerage kinda felt sorry for us.

The leader of that brokerage then told people, behind our backs, that we would likely fail.

She even pulled one of our very first team members aside and told him not to work with us.

We started our own brokerage approx. 12 months after that.

A Realtor once called Nick and ripped him apart over the phone for something we couldn't even understand.

We had another Realtor tell us that they would never work with us and that we were "encroaching" on their domain.

We didn't have our website for at least 12 months, maybe even 18.  This was in 2007 when websites were kinda common.

We gave our presentations by printing off PowerPoint Presentations on paper and then flipping through the booklet in front of people!!

Today - some people regularly come to our introductory classes and try to steal our presentation by furiously copying everything down - once, someone starting taking pictures of the slides.  LOL!!

Our second office location went bankrupt and we had to store the entire brokerage inside Public Storage for almost 2 months.

We were operating with a fax machine on the floor of a single room ... that was our whole operation for that period.

Is it all worth it?

We get to live our life the way we want it.

We take month-long vacations to Europe.

We have responsibilities but a lot of personal freedom.

And it's energizing envisioning what the next 5 or 10 years will bring.

And we expect more battles, more wars, more fun ahead.

And now that we understand it's all part of the process we wouldn't have it any other way.

So if you're fighting a battle today ... know this, you are not alone.

And by putting one foot in front of the other you'll win the battle and conquer the war.