This Is The Story Of How Our Aunt Went To Jail 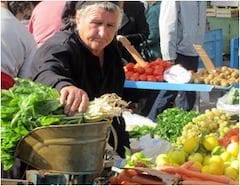 Some family stories should perhaps be kept in the family.

But what the heck...

We all have family skeletons hidden in a closet somewhere, right?

So let's do this.

A lot of people mistakenly believe that we *love* real estate, and we can obviously understand how you may come to that conclusion.

However, we actually only "love" real estate as a means to an end.  We've found very few asset classes that can beat the advantages real estate offers ... cash flow, appreciation, equity build-up, and full asset control are all nice things to have working for you.

And to be fair, very few other asset classes, require you to be so "active" in your investing to generate "passive" income.

It's a complex but very profitable relationship.

But we're preaching to the choir right?

What we really *love* and what we really cherish isn't real estate ... it's our personal freedom.  The freedom to do what we want, when we want it.

Real estate is one piece of our grande financial puzzle.  It serves us a purpose today and it will serve us an even greater purpose ten years from now as more and more debt gets paid off.

Real estate is right up there with creating and running our own businesses.

And because we take this seriously we prefer to have an information advantage when we make decisions about acquiring new assets.

So we read, we observe, we study current events and more importantly we study history.

And part of our family history involves our Aunt.

She was an amazing lady who is no longer with us ... but her legend will be passed on for generations.

Now, before we go further we need to promise you that this week's article has some huge lessons in it. We won't call them, instead we'll let you decide what they are.

Teta Eva, that's "Aunt Eva" in English, was born in Yugoslavia in the middle of nowhere sometime in the 1920's.  Both Nick and I have visited the farm house where she was born, along with our father and five other aunts.  The stone house was built into the side of a rocky hill and it's a strange layout.  The main structure only had three large walls.

The front of the house is actually open to the elements.

They were poor, very very poor.

She managed to finish one more grade than our father, grade 4, before leaving school to help the family farm the rough land.

A few years later, being the oldest daughter, the family decided she would leave the farm and move to the city of Split, Yugoslavia, nestled against the Adriatic Coast.  She was on her own.

That's when she ended up in jail.

Shortly after our Aunt moved to the city she needed to find some work to in order to afford rent, food and clothes.

Instead of working for someone else she told our father that she would need to work for herself to get the most reward for her hard work.

She was an entrepreneur at heart.

So she started selling eggs in the large farmer's market.

That market is an open air affair that is just off the city's main harbour ... it's beautiful and as kids we got to visit her egg stand there many times.

But we always thought she was only selling eggs.

To supplement her income she began introducing other streams of income.

In the fall she would buy excess and scrap metal strips used to reinforce concrete and store them in the basement apartment that she was living in.

Then in the spring she would tell small home builders that she met at the market that she *may* be able to find some for them if they needed it ... but that it would be expensive.

With Yugoslavia being chronically short of building materials, these builders were always on the hunt for supplies in the spring ... especially if they didn't have the proper government connections to secure their supply.

She intentionally waited until well into the building season to create strong demand for her stockpile and then sold it at a hefty premium.

Yugoslavia's currency would fall in value month after month for years.  Local businesses had less international buying power and were often unable to import materials.  Citizens couldn't afford to buy very much of anything.  Shelves in grocery stores were often very bare looking compared to North American standards.

With each passing month they could afford less and less.

Our Aunt, apparently, saw an opportunity to "help" people.

She began exchanging German Marks for Dinars.  People loved this because the German Mark continually appreciated against the Dinar so by doing this they could preserve some of their buying power.

So right in the middle of this beautiful seaside farmer's market, where she was well known for aggressively selling her eggs, she began a career as a currency dealer.

And she was popular. Very popular.

The Communist authorities caught wind of this rogue currency dealer and wanted her shut down.

And you can understand why.

If the demand for a currency decreases then the value of that currency can quickly waterfall into a downward death spiral.  A currency backed by next to nothing needs the public to support it to make it worth anything.

So one day they scooped up our Aunt and threw her in jail.

Yugoslavia is a small place, Split, even smaller and our Aunt was well known in the community there.  She was able to befriend a couple of people at the jail house where she learned that the government had no actual proof of any wrong doing.

From within the confines of her little cell she began negotiating her own release and somewhere between five and ten days later she was let go.

I know she kept selling eggs in the market because both Nick and I visited her and helped her carry the eggs to the market on several occasions during summer vacations ... we just had no idea that we were helping an ex-currency dealer.

Even then, when we thought that she was only selling eggs, we learned a lot about sales from this little lady.  I have a sneaky suspicion she had other streams of income in place at the time.

There are many other "Teta Eva" stories to share but we'll save them for another time.

At the time of her passing she had hundreds of thousands of dollars saved up.

This was a lady with a grade 4 education, hard work ethic and some street smarts, that managed to save up a relative fortune under very non-ideal circumstances.

Her kids were all able to buy their own apartments, cars and acquire some land on one of the beautiful Croatian islands.

Her family legacy lives on today.  We're visiting the plot of land she acquired this summer with my kids ... where they'll hear other "Teta Eva" stories.

In her own way, living in a communist country, our Aunt, was living life on her terms.