Government Saving Canadians from Themselves? (LOL) 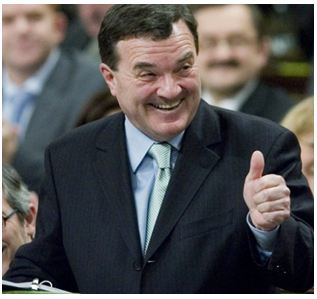 This is great stuff .... in case you missed Jim Flaherty's (Finance Minister of Canada) announcement yesterday here's a quick summary courtesy of the Financial Post: 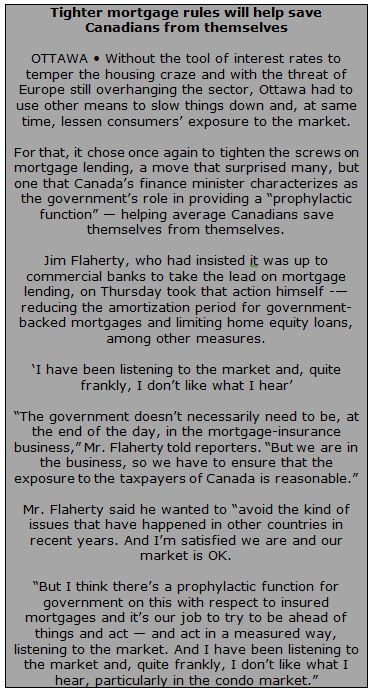 1. These announcements typically only apply to CMHC insured mortgages.  So if you're using non-CMHC mortgage programs these may not apply.  Ask your mortgage broker for details around this - not your bank - they typically deal only with CMHC.

2. The reason the government is doing this is because they can't raise interest rates.  The U.S. rates are so low that if we raised ours it would crush the Canadian economy.

3. Also, if you put down 20% or more on properties you'll likely still have access to longer amortization periods.  In fact, although most Canadians believe 35 and 40 year amortizations were gone long ago several mortgage brokers still had access to them.

4. For buyers, this announcement means more demand for properties before the July 9th effective date.

5. For investors who already own property, you're likely going to have more demand from possible tenants.  Those people who were just able to qualify for a mortgage will now likely not qualify and may need to rent.

6. Because this makes affordability in Toronto even more difficult expect demand for starter homes further away from the downtown Toronto core to increase.

Who is saving government's from themselves?

Back to the headline of the National Post article...

If the finance minister is saving us from ourselves then we've gotta ask?

Who is saving the government from themselves?

Why can Canadians not be trusted to manage their debt but governments spend money they don't have in increasing quantities.

Debt levels are at record highs across the globe.

We may never get an answer to that one.

0 comments on “Government Saving Canadians from Themselves? (LOL)”