How the Media Controls Public Opinion 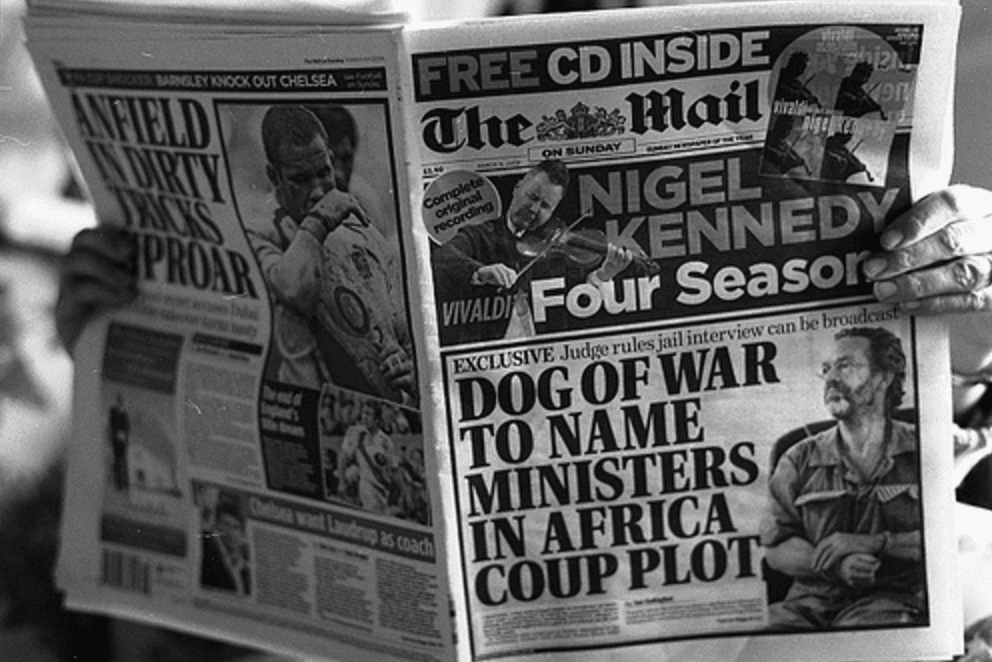 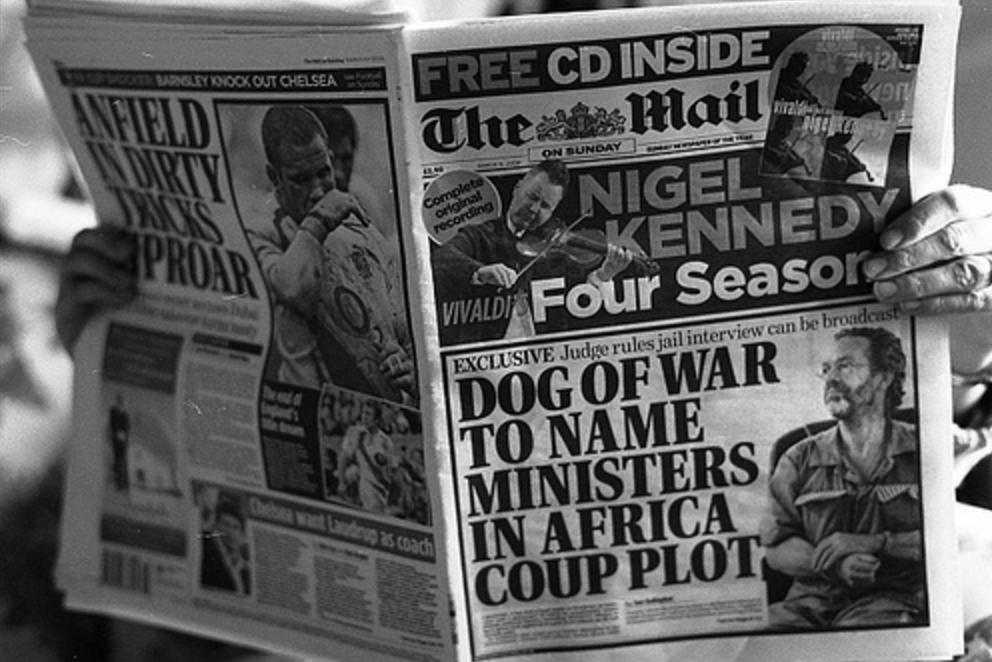 It's always fun to watch how the media plays such a big role in shaping public opinion.

In today's world, we're swarmed with so much information that we literally only have time to read the headlines to stay informed on some subjects.

There's very little time to "go deep" and research all the news that flows through our lives via TV, Radio, Facebook, and Twitter.

And right now there's no shortage of awesome headlines:

Trump Ahead in the Polls!

Trump is Behind in the Polls!

When Nick and myself see a headline on a topic that we are familiar with...

...and if that headline confuses us or seems misleading...

Case in point, check out this beauty of a headline: 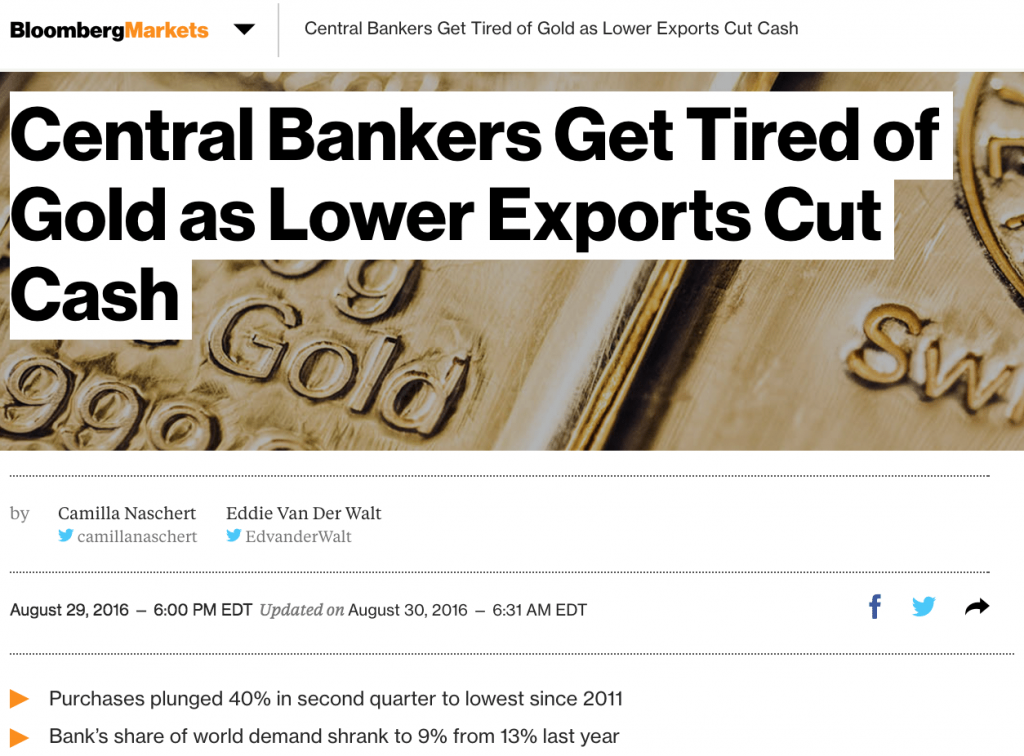 Now, reading this headline the average person is going to think gold is out of favour.

To us, it's a negative article on gold.

The two little sub-headlines are nice extra little jabs at the shiny metal.

And that's fine, headlines are written to get attention, we get it, but when the article then goes on to present an argument that isn't complete we feel like it's not journalism at it's best.

There's a quote in the article that goes like this, "The flows have slowed dramatically,"  (Source), implying that central banks aren't buying much gold anymore.

And there's a nice little chart with a headline that supports the main article's headline: 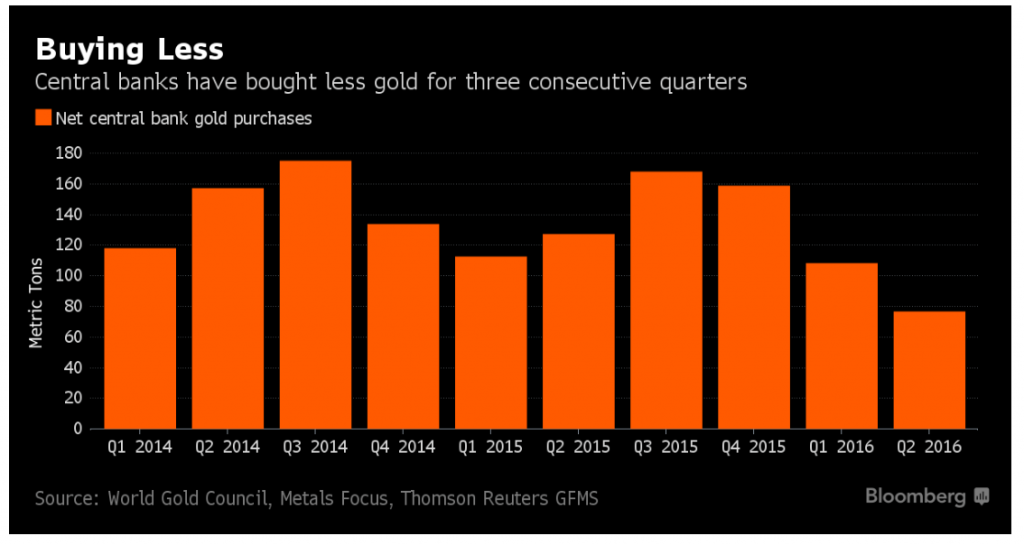 And the article goes on to imply that China, a huge fan of gold in the past, is not buying gold.

They used this chart to illustrate this: 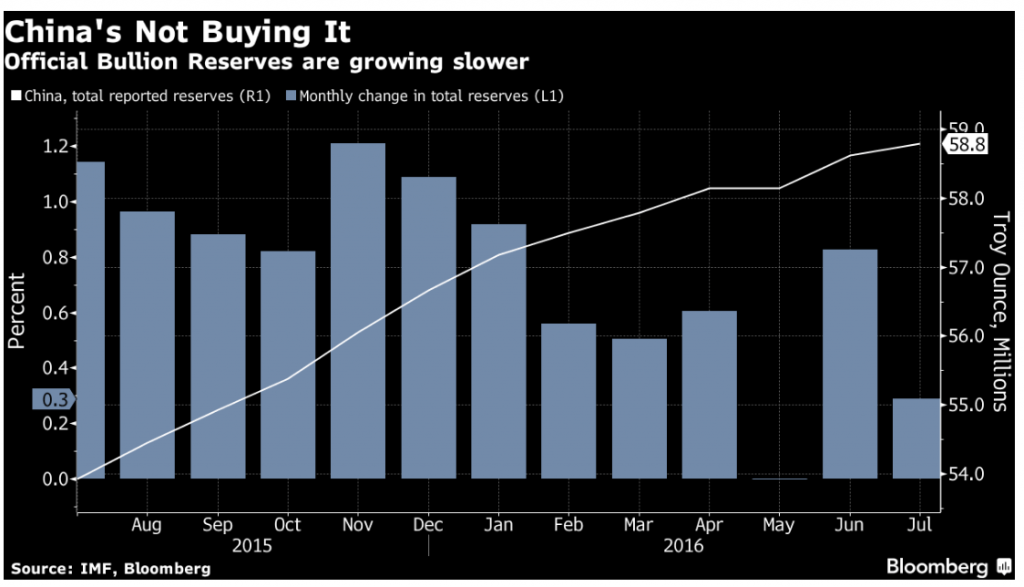 And the chart does indeed show almost no purchases in May and little in July.

However, like everything in life, perspective is critical to understanding.

So let's give a little perspective on this entire subject.

Here are the estimated Chinese gold reserves going all the way back to 1994. 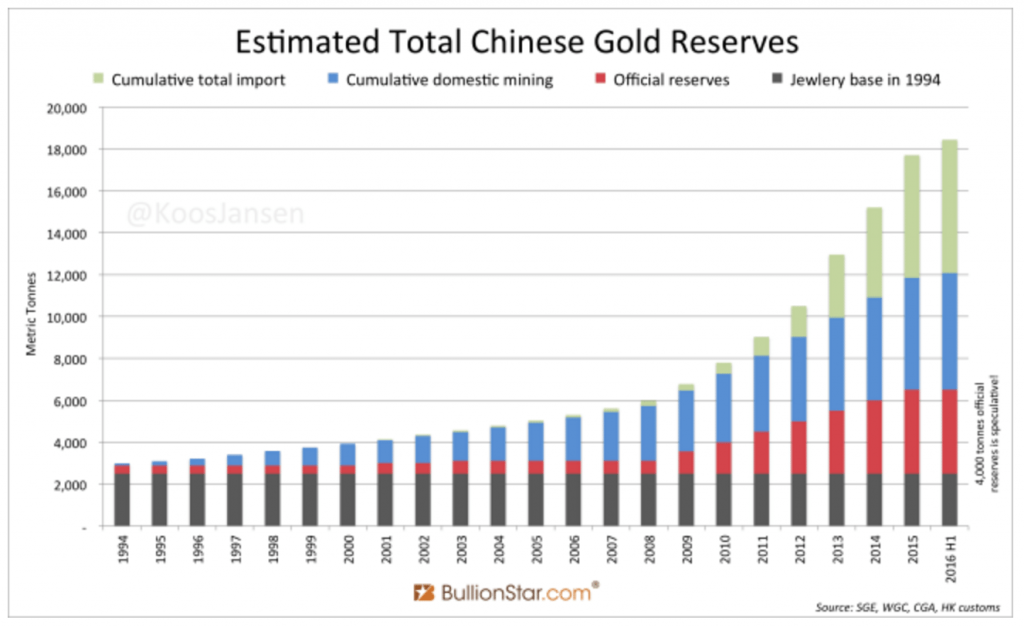 Doesn't really look like China is losing interest in gold to us.

If China is really losing its appetite for the shiny stuff, it's coming after a ten year feast on it.

And in this chart, the official gold reserves are reported using the "official" Chinese numbers but many insiders believe China has a much higher amount. They have a history of under-reporting their reserves and waiting years to "true up" on the data.

What about central banks around the world as a whole?

Are they losing interest in gold?

Let's look at the data for some context.

Here's a historic chart of central bank gold holdings around the world: 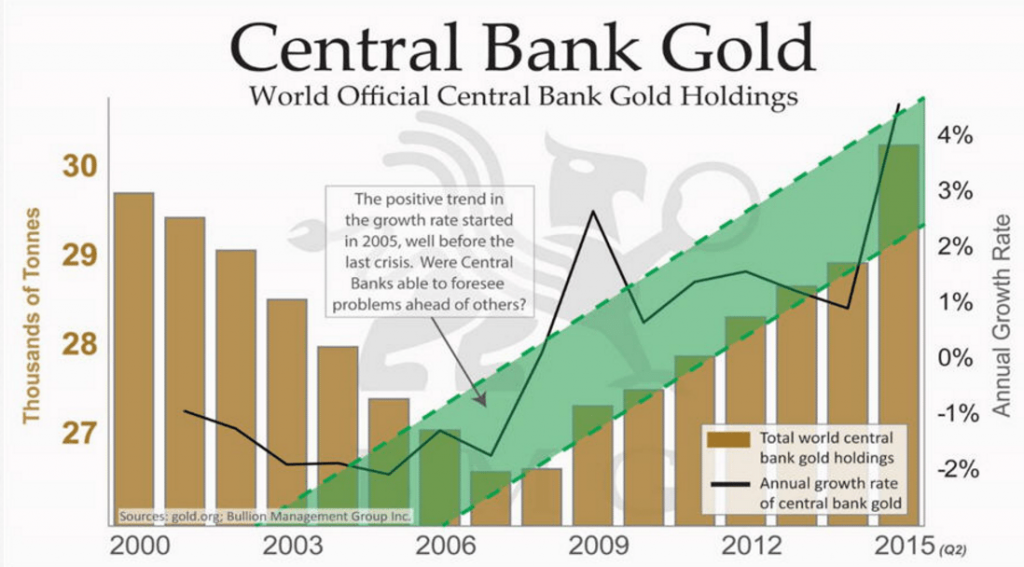 Central banks have been accumulating gold at a good pace for the last ten years.

Also, if we dig a little deeper we can see something super interesting happening.

There may be a big change afoot.

Check out this chart that shows Swiss exports of gold.

Switzerland is the main refiner of gold so their export data is a good clue to who is buying. 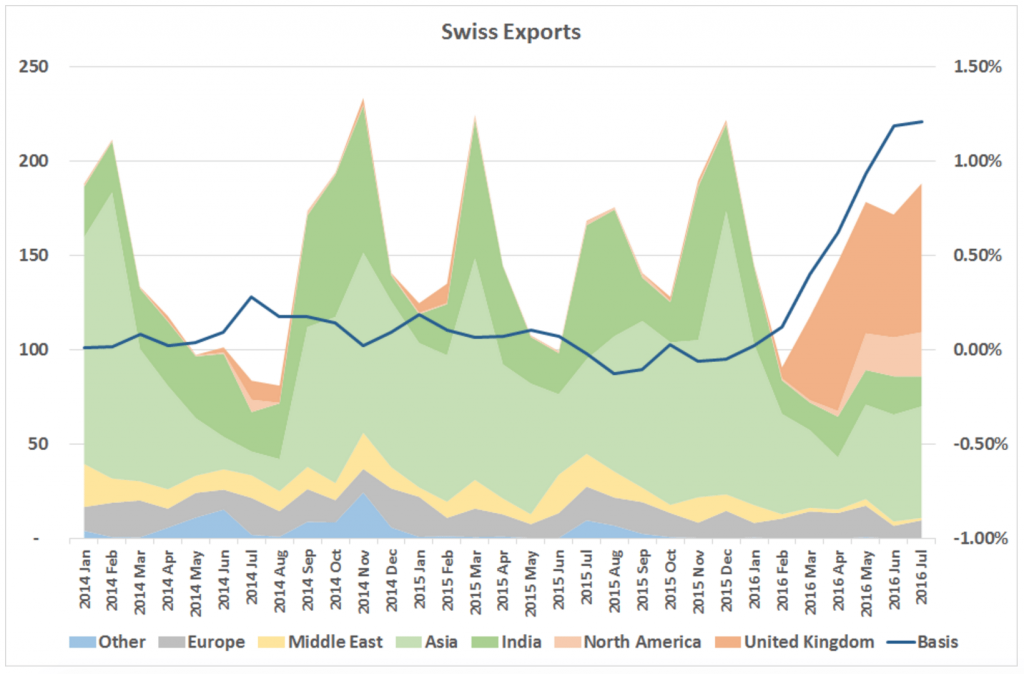 If you look at the data closely you can see that, for the first time in many months, North America and the UK are big destinations for gold.

For the previous couple of years, India and Asia were the top destinations.

Now demand in North American and the UK is taking over top spot.

Why the sudden new interest in the shiny metal from North America and the UK?

Do they know something we don't?

Regardless, it sure doesn't look like exports of gold to destinations around the world is slowing down much.

And the U.S. has always quietly been a huge lover of gold, even if they try to dismiss it's importance to them in the media.

So who exactly is getting tired of gold?

If the USA was really tiring of gold, it's not really showing signs of dumping the stuff: 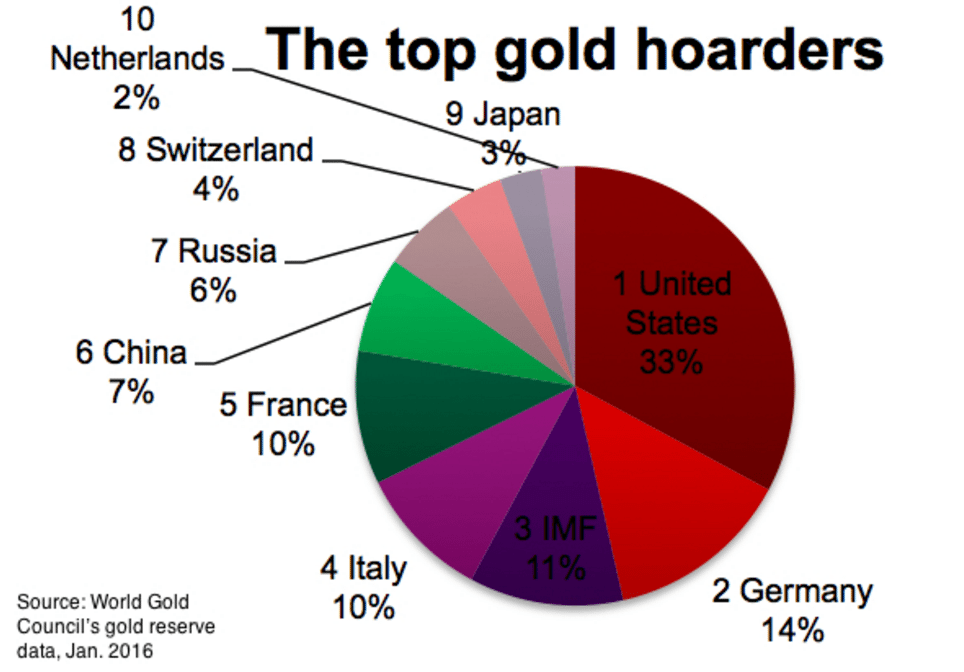 The U.S. has more than any other independent nation.

Looking at this data we can't find anyone tired of gold at all.

We're hearing Venezuela is selling some of theirs but they got big problems and big bills to pay.

To us, it's looking like the opposite of central banks tiring of gold, but we like the stuff so we have a heavy bias of course.

And in fact, there is one country that does seem tired of gold.

The next time someone takes a selfie with Justin Trudeau, can you do us a favour and ask what we did with the money we got for our last little bit of gold?

I'm sure we have excellent reasons for having a tiny 77 ounces in the vaults, while the rest of the world continues to pile on its purchases.

(Aside:  We have our own theory on why Canada did this and we'll be sharing it at the upcoming Your Life! Your Terms! event on October 1, 2016)

Today we used a gold article as an example of how the media can shape public opinion with a quick headline but we could have used almost any topic:  real estate, fitness, diet, etc.

A long time ago someone encouraged us to read Napoleon Hill's, The Law of Success in 16 Lessons.

One of the laws was the power of "accurate thought."

It discussed separating "facts" from "information" as the foundation of all success.

In today's world of rapid headlines and twitter feeds, it seems that this law is more valuable than ever.

0 comments on “How the Media Controls Public Opinion”