High Inflation is 'Keeping the Bank of Canada up at Night' 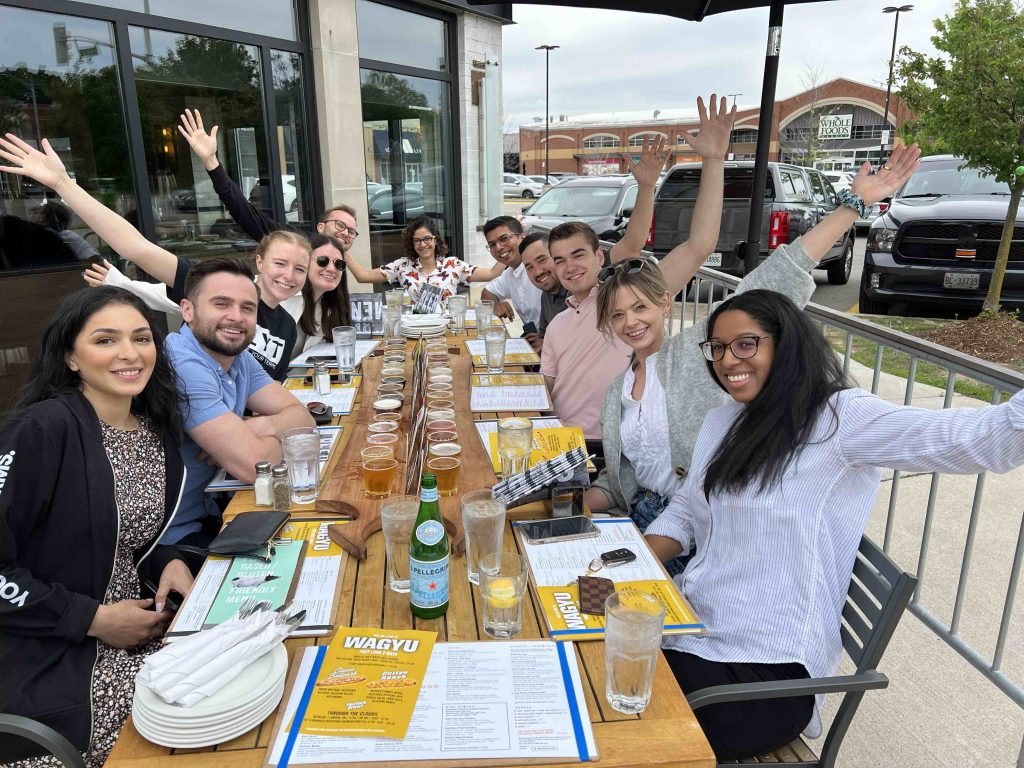 That’s a bunch of us from the Rock Star team out at Beertown trying to enjoy some sunshine a few weeks back when we were doubting if we would get any real heat this year!

But the weather has now turned, the sun is out, and it’s full on patio time!

Nick keeps a list of his favourite patios around the world and I’m always bugging him to make a book out of it.

This way we can have a business excuse to travel to a whole lot of patios that we haven’t explored in the name of “research and education”.

My absolute favorite patio in the world is on Brela Beach on the Adriatic Sea.

Right off the amazing beach, literally 50 feet, sits a professionally run restaurant with amazing fresh seafood and meat dishes along with an amazing array of white wines.

The waiters are absolutely amazing, the patio itself uses large pine trees for shade and in the heat they give off the most amazing aroma.

The view of the beach and mountains and sunsets is stunning.

And, for lunch, you can stroll into this patio with your bathing suit. Our families have spent so many hours on that patio that they know us by name.

Inflation is completely out of control at this point.

The latest 7.7% inflation number almost locks in a 0.75% rate hike in July. Some are even discussing a possible 1% increase. That’s absolutely nutty to think about.

Here’s what we’re now on the look out for:

Will the bond market sniff out that the central bankers are raising rates into a recession?

Because if it does, we could be in a situation where fixed rates start coming down as the bond market calls the central banker’s bluff on their ability to keep raising (remember, they promised 5-6 more rate increases after this next one).

Wouldn’t that be wild?

The next few months are going to be super interesting.

We don’t have a crystal ball and we don’t know what will happen exactly but here’s what we do know:

It’s now causing inflation that they can’t seem to control and apparently it’s keeping them up at night (Financial Post: High Inflation ‘is keeping us up at night’ Bank of Canada Senior Deputy Governor).

So what are they doing about it? Raising rates so far, so fast that if we’re not in a recession now, we’ll likely be in one soon.

So if we do enter a recession shortly, what are they likely going to do?

The only thing they can do…

Print more money to try and get us out of a recession.

They kept rates way too low for too long, hard assets have been spiking for 10 years now.

Next, they handed out money so quickly that they grew the amount of currency in the economy by 30% in two years.

Now they want to retreat, so they’re raising rates.

But there’s so much debt that we don’t believe they can raise them much without causing a recession. LOL!

It’s a circus act out there in central banking land.

2. So we could be in a situation soon where we have slowing economic growth AND inflation. Sounds crazy but it’s true.

Now, that’s what should be keeping central bankers up at night!

They’re painted into a corner and their only real tool is to push more money into the economy.

They can use QE, they can lower rates again, they can work with governments to convince them to send out cheques to the masses…but they can’t solve any real issues.

And therein lies the problem.

We do not have leaders who are built to handle any of this. It’s a mess.

But if you study this stuff and you build a framework for understanding what’s going on, then we still believe you can navigate these confusing times rather well.

For us that means owning assets.

Employment income isn’t going to get us where we want to be. And saving in dollars certainly won’t.

So we want assets that we can control.

We like income-producing real estate in areas where demand continues to outpace supply (hello, southern Ontario!)

We like our long-term savings (so 18 months and beyond) to be in a form of money that the government will have a difficult time controlling or locking down (hello, Bitcoin and gold).

And then we keep liquid dollars for day-to-day living.

Anything beyond what we need for 18 months or so goes into long term savings or hard asset purchases.

And what works for us may not work for you. But it’s time to have a plan.

The next few months and years are going to be volatile. You’ll want to think about your next moves strategically.

What’s your plan? Do you have one yet?

When we began we didn’t have savings, properties or businesses. We just mapped out a little plan for ourselves and got busy.

You can live life on your terms starting right now. If it’s possible for these two brothers from Mississauga, then it’s definitely possible for you too!!

On a lighter note…

This week Andrew Palhetas, a long time member of the Rock Star team, shares how he invests for lifestyle and not just ROI.

Andrew started with us in his early 20s and has been very strategic with his investments both in Canada and abroad.

He’s now in his 30s and in this episode he shares his investment decision-making process, the impact lifestyle investments have on your confidence, and when you know it’s time to enjoy some of your profits.

You can watch it here.

Surround yourself with people who will support and encourage you and who are doing the things you want to be doing.

That Brela patio is calling me…we’ll be there soon!