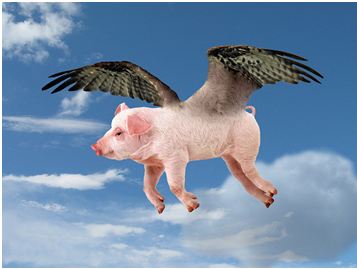 Let's see if we can make any sense of the world with a some fun financial charts.

Can financial charts be fun??

Let's do our best to try and have some fun with them anyway.

You can read all the glorious details here.

They hinted that raising rates "may become appropriate" when pigs fly or when we put a Canadian on Mars ... whichever comes first.

Let's face it ... the Bank of Canada ain't raising rates in any considerable way, shape or form anytime soon.

I mean ... a 1/4 point here or a 1/2 point there may be enough to create psychotic and scary headlines in the papers but those types of interest rate moves are rather meaningless.

And why can we fell so confident about this? 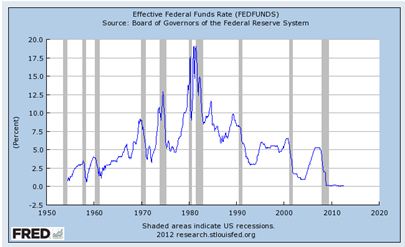 U.S. rates always dictate our rate policy in Canada so it's interesting stuff but let's look at Canadian fun charts.

We'd show you rates before 1950 but for some reason that chart has been discontinued on the St. Louis Fed's website  (you can see that here).

But we're in luck!

Because who cares about the U.S. anyway right?  🙂  (only half joking)

We're not sure why but the Bank of Canada doesn't seem to post these charts any longer (they're probably there - we just can't find 'em today - Crossfit exhaustion is kicking in at the moment).

But luckily we kept copies of them around.

So here's Canada's rate chart from the 1975 to present: 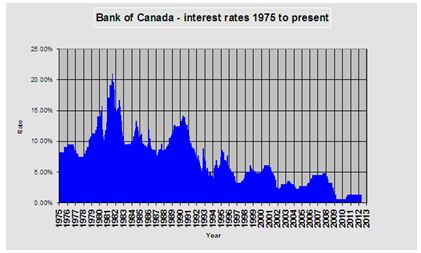 The last time we had a economic problem rates stayed low for what look like 20 years.

Could we have another 16 years of low rates ahead?

Is that how long it will take to put a Canadian on Mars (that was an attempt at a funny joke).

Check out this chart... 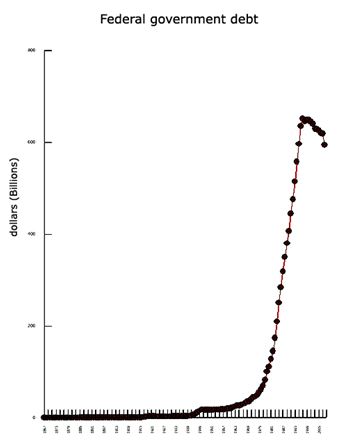 Looks like we've been drinking from the easy money punch bowl for the last 20 years or so.

And it doesn't look like we're going to stop drinking from the easy-money-punch-bowl anytime soon... 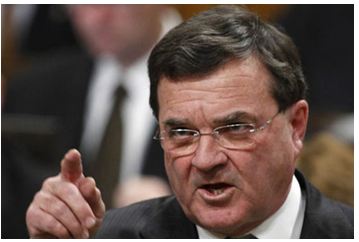 ...because although he looks serious ... last Friday our Finance Minister, Jim Flaherty, mentioned he'll  spend more money we don't have "if needed".  (Source)

That was partially in response to the U.S. announcing last week it will print about $40B per month, every month, perhaps forever!

Or about 1.3 Billion dollars a day.

Canada doesn't want to be left behind ... so we'll have to print-print-print too!

It's such a vicious circle. 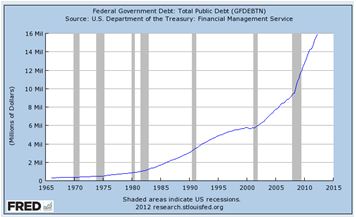 Looks like that line is about to go right off the page.

Now that would be a fun chart!

And not to be out done, yesterday, the Bank of Japan said it would print another 10 Trillion Yen for it's bond buying program of easy money.  (Source)

With all this easy money and fat debts ... and with no government will to control spending (in any country) ... this is only the beginning.

And as a result ... if you're smart about it ... you could be taking advantage of low rates for some time to come ... or at least until pigs fly.

(On Saturday October 13th we'll be having our Rock Star Inner Circle Member Event where we do a deep dive into the current state of the Economy - if you're a member of ours and haven't reached out to Kayla in the office yet do so today!)