We Are Drunk on Cheap Money - Oh Yeah! 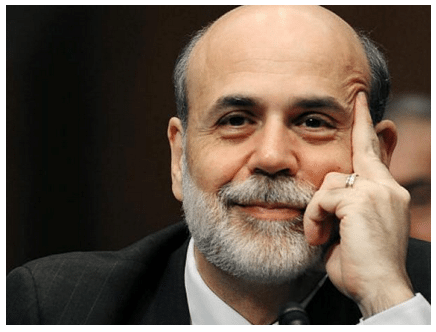 The world has gone mad.

And the captain is drunk.

In case you missed it, yesterday the U.S. Federal Reserve Chairman, Ben Bernanke, shocked the financial world by agreeing to continue pulling $85 Billion a month out of thin air to buy funky smelling assets.

All in an effort to get the economy rolling.

Stocks rallied, analysts were "shocked", "surprised" and "caught-off-guard" with the announcement.

Quick Aside:  We pay very close attention to the U.S. Federal Reserve because their decisions impact the Bank of Canada's policies which impact the interest rates on our property mortgages.

Last week a good friend of mine asked me over glasses of wine if we thought the Fed would "taper" their injections of cash into the market.

Not only did we think they wouldn't ... we told him that they couldn't.

I mean...they could have done it for a few months to "save face" and make it seem like they were getting serious about pulling back their liquidity/money printing.

But even if they did that, let's face it, it wouldn't last.

The U.S. Federal Reserve has a mandate to maximize employment and to minimize inflation.

So let's check in on how they're doing.

Here's a chart from one of the Fed's very own websites that shows how ratio of the U.S. population that is employed. 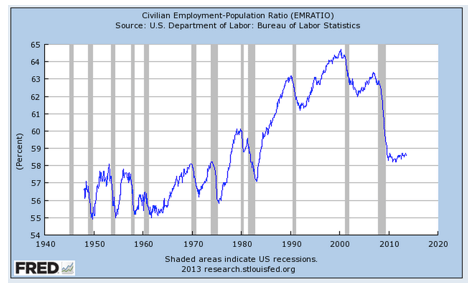 See that cliff that employment fell off about 5 years ago?

Well, it doesn't seem like all the Fed's interventions in the markets have really helped that much.

In fact, the only thing that has happened is that the more and more debt has piled up and there's been no economic growth to speak of.

Look at what it was only 5 years ago.

So all the headlines that "U.S. debt levels are better" and the "budget deficit" is getting smaller mean almost NOTHING when compared to the size of the economy the above chart keeps going UP.

It's like saying you reduced my spending last month but I reduced your income even more.

They've spent a lot of money but the economy is going nowhere.

And yes, you are correct, drunk captains are in charge of the world's biggest ship.

Take a peek at how many Americans now require food stamps these days... 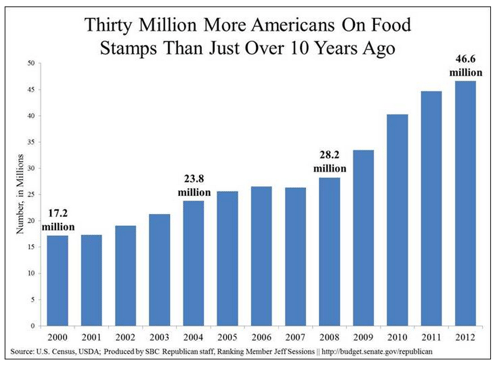 This is not a laughing matter.

46.6 million is a lot of people and a lot more than the entire population of Canada.

So the Fed's mandate of maximizing employment, would seem to us, has a little ways to go (just a little).

And we haven't even discussed the effect that rising interest rates has on all of the U.S.'s big fat interest payments on their debt.

And we haven't discussed inflation either.  Has anyone seen the price of houses or tomatoes these days?

We're going to save all those juicy details for the Economic Update at the upcoming Rock Star Inner Circle Member Event.

If you're a member and haven't registered for it make sure you do so soon.  We're at 80% capacity.  And we have some great guest speakers lined up for you.

You know what makes us shake our heads at these things more than anything?

These days you have many of smartest hedge fund managers in the world - not focusing on the fundamentals of companies that they want to invest in.

Instead, they're admittedly trying to read the mind of a single person ... Ben Bernanke at the Federal Reserve.

Personally, we can't invest that way.

That's investing voodoo to us.

We prefer long-term, cash flowing, hard assets that we can touch and smell.

This way we don't have to worry about our portfolio going through massive gyrations on the whims of a single drunken sailor!

0 comments on “We Are Drunk on Cheap Money - Oh Yeah!”