Rock Star Inner Circle > Real Estate Investing > Does Canada Have More Similarities to the Cyprus Crisis Than We Think?

Does Canada Have More Similarities to the Cyprus Crisis Than We Think? 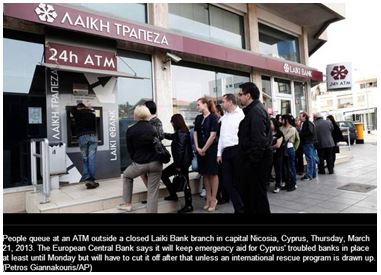 Have you been tracking what's going on in Cyprus?

Here it is in a nutshell:

1. The International Monetary Fund (IMF) told Cyprus they're broke and their banks are broke.

2. They then said instead of giving Cyprus a "bail out" of cash to save themselves that instead, they would take money from people's bank accounts.  Somewhere between 10% and 6% depending on how much money you have.

3. People freaked out and then Russia stepped in and influenced Cyprus' parliament to vote "NO" and give the middle finger to the IMF (based out of Washington).

4. The Cyrpus Finance Minister flew to Russia and is trying to work a deal where the Russians save Cyprus instead of the IMF.

1. Banks have been closed for days now.  ATMs are running out of money.

2. The British have flown in $1,000,000 Euros in cash in an airplane to give money to the soldiers on their military base in Cyprus because they can't get any money to buy groceries.  (Source)

3. The IMF has a lot of egg on their face and may have to back track entirely.

4. The financial world looks like its built on a house of cards if Cyprus can have Washington and Russia at each others throats.

Sounds almost like a banana republic over there doesn't it.

And right when I think something like that could never, NEVER, happen over here in Canada we see this headline: 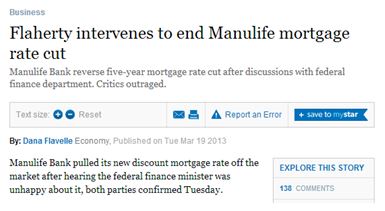 This is not the Canada I'm used to.

One where the government steps in and tells private business what to do.

And it's not that we necessarily disagree that these low interest rates may be forcing up housing prices ...

But come on Mr. Finance Minister ... the cause of the problem is not Manulife, they're a business trying to make a profit.

Raise interest rates in Canada via the Bank of Canada and be done with it.

But oh wait, they can't do that because the whole world is "stimulus spending" and the interest rates in the U.S. are at 220 year lows.  220 year lows!

So we're reduced to the government now telling Canadian companies what they can and cannot do.

And I had a financial planner with all of 3 years experience tell me this week, "Who cares, the stock market is up."

For the record Mr. Money Manager the stock market may be "up" but in "real terms" (inflation adjusted terms) it's not up at all.

Although it's going up you are not making any money at all.

Check out these charts courtesy of SovereignMan.com: 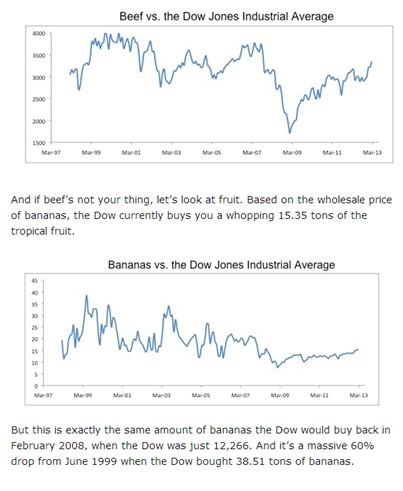 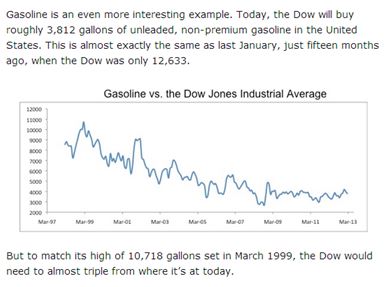 But you wouldn't know this to be the case if you look at the headlines or watch most of the financial news.

They're practically popping champagne corks daily in celebration of each new high.

And because interest rates are being artificially manipulated lower it's causing seniors to dump money into riskier assets like the stock market.

There was a time when seniors had a goal to save up $1,000,000 dollars ... invest it conservatively and live off the proceeds.

Today a one year GIC in Canada is paying out 1.25%

These low interest rate policies around the world:

1. Are forcing money into risky assets and this should not be happening.

2. It's punishing savers and depriving them of normal rates of return.

2. It's causing Finance Minister's to do crazy things like call private enterprises to tell them how to run their businesses.

3. It's creating new bubbles right after previous bubbles burst and not addressing the real issues of governments spending more than they earn.

We can't save the world from all of these strange current events.

But we can take care of ourselves.

And during the next few years it's pretty obvious there is no one looking after your best interests except for you.

All of this does make for fun times and interest headlines though ... doesn't it?

0 comments on “Does Canada Have More Similarities to the Cyprus Crisis Than We Think?”