Canada is in a Pickle! A Big Pickle.

The world is a complicated place.  The economic world anyway.

Things like family, friends, your values and your home are pretty simple and straightforward (most of the time!).

But the economic world is a funny place.  Every day we read commentary that seems to contradict what we read the day before.

The moment you think you've got it all figured out you're thrown a curve ball.

"Will interest rates go up this summer?  Stay flat?"

"Will the Canadian Dollar rise or fall from here?"

"Why do I care about Canada's GDP again?"

Canada is in a tough spot right now.  The Bank of Canada must be freaking out.

The whole country is expecting some sort of rate increase this summer.

And it'll likely happen ... at least a small one.  No big two-point move or anything.

Here's what we believe is going on...

Canada needs to show the country that it's serious about cooling the real estate market.

Mostly because last month's mortgage announcements will do almost nothing to actually cool the market.  And we can tell you from direct experience that the market is active, very active.

So this summer they likely put a stake in the ground to show they are taking action and move rates higher - slightly.

The second thing that they want to show the country with this move is that they are serious about controlling inflation.

That's because the latest data from Statistics Canada clearly show that it's on the rise.

The measure they use to track this is the Consumer Price Index (CPI).

The latest 12-month data shows that it's just below the 2% mark right now from Statistics Canada:

And the Bank of Canada has a stated goal to keep inflation between 1% and 3%.

They put it right on their website for all of us to see, here's a handy chart from their site:

And you can see on this handy-dandy illustration that if the Bank of Canada raises their overnight lending rates for Canadian Banks then two things happen:

1. The Canadian Dollar will rise.
2. Consumer and Business borrowing rates will rise.

This decreases demand for goods and services and prices drop.

This is how Canada's central bank controls inflation.

But what works in theory doesn't always lend itself to perfect implementation in practice.

And there's a pretty heated debate going on behind closed doors at the Bank of Canada right now.

How do we know this?

There are many clues floating around and here's just one...there's a great quote in today's Financial Post:

"If the bank raises rates, it will push the dollar to parity and put a serious damper on exporters.  But if it does not raise rates, then the bank would appear soft on inflation and also possibly damage the economy."

That about sums things up rather nicely.

Canada is in a pickle.  A big one.

You see, if the Bank of Canada raises rates it will hurt Canadian companies who sell and export their goods and services to the U.S.

But if the Bank of Canada doesn't raise rates then inflation picks up speed and the housing market maintains its incredible pace.

Which isn't practical or healthy.

Now you may say, "Well, they've figured things out in the past so I'm sure they'll figure it out again."

But that would be dismissing today's situation too easily.

Canada has the good fortune of being next door to the biggest economy in the world.

And although recently everyone has been getting those warm and fuzzy feelings about the U.S.- mostly because the Dow Jones Industrial Average is above 10,000 - we're not entirely buying the hype that the U.S. has turned the corner on its issues.

They're a big difference between what is reported on CNBC and what we're hearing on the streets down there from our friends that work in different sectors of the U.S. economy.

So we decided to poke around a little and see what we found.

And we hit something interesting.

About a year ago we did a presentation on the History of Money to our Rock Star Inner Circle Members (formerly Income for Life).

And we showed a chart from the St. Louis Federal Reserve that clearly displayed how much money was being created down in the U.S. to help it get through the financial crisis.

Here's how the chart looked about a year ago: 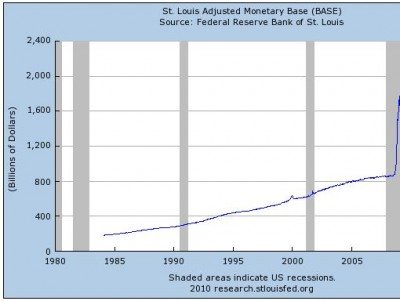 The amount of money put into the economy skyrocketed about 18 months ago.

Just the fact that this jump in money creation was so huge that the crisis down in the U.S. is a little larger than anything they've dealt with in the past 30 years.

Can you see the little spike right around the year 2001?  That's what was injected into the market after 9-11.

See how much larger this new spike at around 2008 is?

Now, let's take a look at the updated chart: 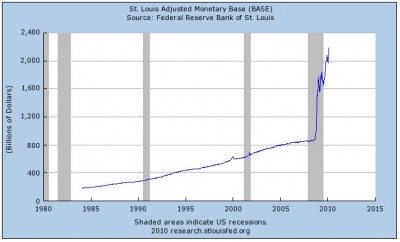 What's surprising here is that the monetary base has continued it's rather steep upward trend. over the past 12 months.

The reason this is a bit of an eye-opener for us is because over the last six months there's been a certain calmness that has come over the markets.

It *seems* the media has accepted the fact that the economy is back in working order.

But this new chart would seem to imply that the U.S. Federal Reserve has been pretty busy putting out more fires over the past 12 months with a pretty intense increase to the monetary base.

What Does This All Mean To Us?

So this is all fine and dandy but what does it mean to all of us looking to take care of ourselves, our family and our local communities?

To us, it means that we're not out of the woods yet.

And it also means that although the Bank of Canada really needs to raise interest rates to cool the housing market they will likely only make a couple of small interest rate moves this year.

As a sign to the country that they are taking action and acting responsibly.

But our money says they likely because the real estate market is so hot they really would want to raise interest rates a lot more than they actually will.

But because the U.S., the largest customer for the thing things that we sell, isn't out of the rough waters yet the Bank of Canada can't make any large increases.

If they did the Canadian Dollar will become a very attractive place for foreign investors.

Because our higher interest rates would attract foreign investment and increase the value of our dollar.

And this would hurt our exporters and our economy pretty dramatically.

So we definitely don't envy the position the Bank of Canada finds itself in.

And who knows, the Bank of Canada and the powers that be in the government may have a major policy change and decide to jack up interest rates.

It's the government after all ... you never know what they'll do!

So what can you do about all of this?

As Canadians ourselves we believe that it's important to take control of your life, your future.

And the way we do it is this:

1. Cash.  Pay down and pay off consumer debt and keep access to cash.  You can do that by holding Canadian Dollars in your bank account and/or perhaps holding things like gold and silver.

2. Cash Flow.  Having cash is great but without some sort of income or cash flow, you won't last long.  You can do that by starting your side business or by owning and operating cash flowing rental property.

3.  Credit.  With good credit, you'll be able to get loans, mortgages and credit whenever you need it.

If you can build each of these in your life, it's our opinion, that you'll be able to ride out anything that comes along.

When good opportunities arise you'll be able to jump on them quickly.

Remember, we always believe the glass is half full.

These times present an opportunity for all of us and with some education and some action you can position yourself nicely for anything!

The next few years are going to be fun, we can't wait to see where things go from here.

So what's the bottom line on interest rates?

Likely they'll raise rates a little in the summer.  And if they need to raise them further to cool the housing market but can't, then we'll likely here another CMHC announcement requiring a minimum 10% down payment for home purchases.

This is one way to cool the housing sector without affecting the entire economy with a more broad-based interest rate increase.

As investors we love that, it creates a larger, stronger pool of tenants for our properties!