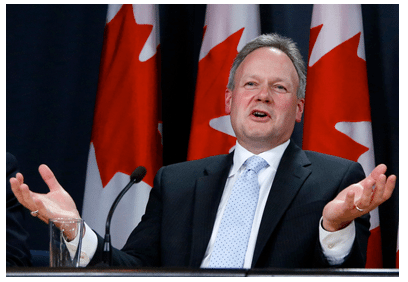 The last time we commented on the state of economic affairs in the world on this blog we got some interesting (aka ... nasty) emails claiming that we were spreading unnecessary fear.

Things are unnecessary only until they aren't.

With that, let's proceed shall we?

"OTTAWA - There has been a sea change at the Bank of Canada.

No longer are policymakers setting a specific monetary course. They are dropping their so-called "forward guidance " on conditions needed before any interest rate adjustment and taking on a less-rosy outlook for the economic climate, in Canada and globally.

Any rate change will be "very clearly later than we thought", Mr. Poloz, 58, told reporters in Ottawa.

But the bank governor would not comment on which direction - up or down - rates will eventually take.  Instead, Mr. Poloz said the process of balancing future data will not be a matter of "engineering" but "risk management"."

We are at the mercy of the fiscal mess in the U.S. and won't change our rates until they do.

And what's this about "engineering"?  Did they really think they could "engineer" a recovery by pulling the strings on interest rate direction?

Think about this from the point of view of a business owner...

Why would they invest in new jobs, new equipment, new "productivity" when they have no confidence in what will happen with interest rates.

They're low, then you hear threats that they're going higher, then they don't go higher ... it's straight up confusing.

Would you take out a loan to expand your business in such an environment?

Or would you sit on your cash and wait for clearer direction?

Bill Gross, one of the founders of PIMCO, who manages the world's largest bond fund recently had this to say in his October 2013 Investment Letter: Survival of the Fittest

"The U.S. (and global economy) may have to get used to financially repressive - and therefore low policy rates - for decades to come.

... the last time the U.S. economy was this highly levered (early 1940s) it took over 25-years of 10-year Treasury rates averaging 3% less than nominal GDP to accomplish a "beautiful deleveraging".

That would place the 10-year Treasury at close to 1% and the policy rate at 25 basis points until sometime around 2035!"

What do these types of announcements and proclamations mean to us?

We don't have the magical crystal ball but here's our two cents:

1. The leaders at the central banks are lost.

2. Low rates are going to be here for a very long time.

3. James G. Rickards says it best when he concludes in his book, Currency Wars, that the only way out of the fiscal mess that began in 2007 is to either:

A) Default on all the government debt that cannot be paid back.

B) Create enough inflation so that the debt looks small in comparison to an inflated economy.

4. Lastly, option B above is clearly what is being attempted and it will work as long as their not a loss in confidence by the holders of government debt (aka ... bonds/treasuries).  If those holders feel like they'll never be paid back, or they'll be paid back in inflated cash (dollars that are worth much less) they may bail and sell a lot of them - quickly.  And if that happens it'll be an epic mess.

Where Do You Put Your Money?

Remember, we're just two Canadian Toronto Maple Leafs fans (Go Leafs Go!) trying to find our own way ... but you could summarize our thoughts with this:

1. We'd rather own assets that pay for themselves - sometimes referred to as "productive assets".  So things like income producing real estate and businesses.  The price of these things may go up and down but there's ultimately an exchange of value happening that keeps money flowing to us.  Think of it this way ... the price may go up and down but the value of them never changes.

2. We'd like to have some of our assets completely out of this financial mess of a system.  For us that means things like land, gold/silver, fine art etc.  Some portion of our assets completely out of harms way.  We do have a dream of owning a farm with some "grass-fed" cattle on it.  Maybe our own free range chickens too.  And some large, old-school, barn parties!  Ah, can't wait for that day!

The cool part, when you study the above points before you invest there's still a lot of opportunity out there.

And there's nothing to fear ... there's more than enough opportunity in this environment when you understand the rules of the game.