Rock Star Inner Circle > Weekly Update > Are Real Estate Prices in the GTA Up, Down or Sideways?

Are Real Estate Prices in the GTA Up, Down or Sideways? 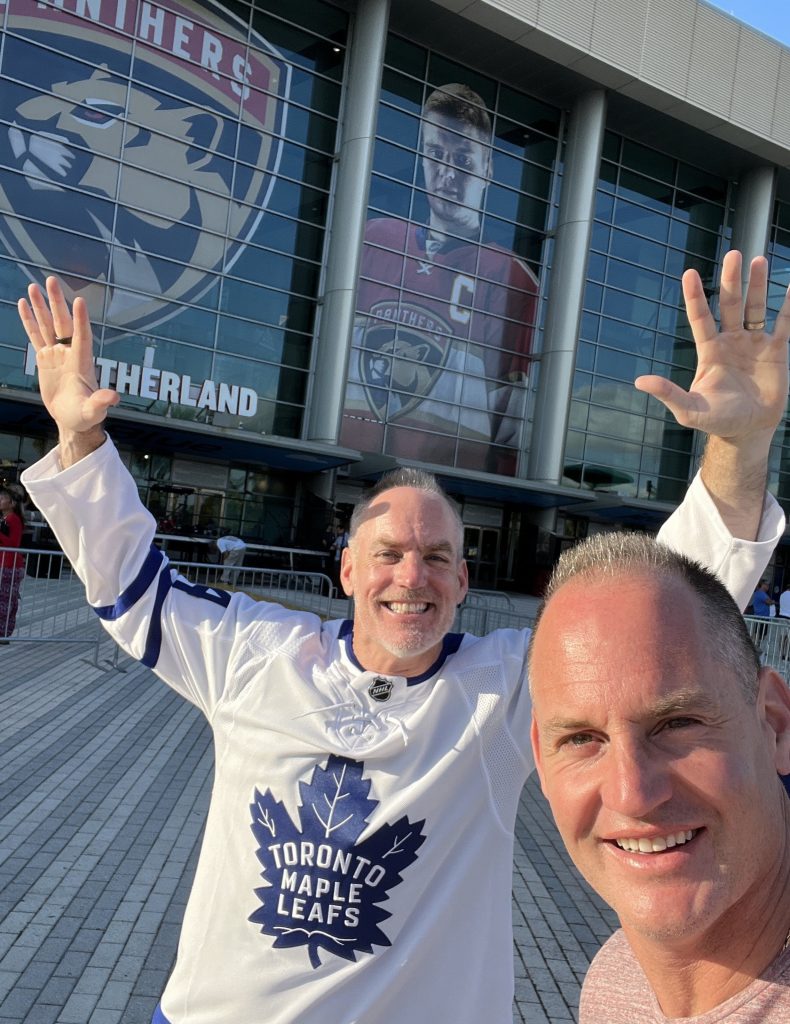 That’s us at one of the craziest Leafs games we’ve ever been to.

We were in Miami for the Bitcoin conference earlier this month and scooted up to see our beloved Maple Leafs play the Florida Panthers.

Some Florida fans were laying it on us pretty thick, but as veteran Leafs fans we told them we’re so used to epic collapses that it didn’t even phase us.

In fact, even after the OT loss, we left feeling like we saw a great game, LOL!!

Between the Jays, the Maple Leafs in the playoffs, and the Raptors with a huge game tonight…it’s great being a Toronto sports fan right now!!

You know what’s not so great?

Trying to make any sense of the real estate headlines right now.

Are real estate prices in Ontario and the GTA up?

Are they down? Are they moving sideways?

If the properties are priced right, they are still selling.

By way of example, in St Catharines, just yesterday a property sold for slightly over the $750K list price with two offers. It took 4 days.

If the same property had been listed for an extra $100K (like some people have been doing) it would likely sit on the market right now.

But it was listed at a fair market price and got multiple offers.

So we’re in a market that is trying to find its footing.

Some properties are going to sit for a bit because they are still trying to set new price records.

Some are going to sell quickly, with multiple offers even.

Real estate is not an efficient market so these changes often take a couple of months to settle in.

The media is going to have a field day with this and run a lot of fear-based headlines. They typically don’t have a clue to the nuance of the market.

And they really don’t have a clue when it comes to the importance of holding hard assets in a world that is creating more and more debt.

Things are going to get even more interesting…

Canada recently raised rates, as we all know.

And guess what happened today?

The U.S. announced that their economy shrank by 1.4% in the first quarter!

So now the Federal Reserve is planning to raise rates as their economy is already slowing?

If Q2 is slow as well it’ll officially be a recession and the Fed will be increasing rates going into a new recession!

You can’t make this stuff up.

So will the U.S. actually continue to raise rates? And what will Canada now choose to do?

Will we continue to raise rates here? Maybe slip in one more juicy raise and then hold for a bit?

We’ll do our very best through this email, The Your Life! Your Terms! Show, and the Rock Star Minutes to keep you up to date.

As investors, remember, with this confusion in the market comes opportunity.

If your long-term goals are clear, then you may be able to act decisively now with less competition.

The fundamentals have not changed.

When global debt is 4x larger than the economy, you can’t raise rates without causing some serious chaos.

In this type of economic environment, we believe owning good, income-generating, hard assets is still a great thing. Especially in an area with the population fundamentals that we have here in the GTA and Golden Horseshoe.

Next Saturday May 7, 2022 we have our first in-person Your Life. Your Terms. Event in over two years!!

We’re going to have 750 people out to chat about all of this. This one is exclusively for Rock Star Members. If you’re a member and have not saved your seat yet, please do so right now by reaching out to the team.

We have a hard cap at this venue and a waiting list is about to go into effect.

Reach out to the team to save your spot before it’s too late!

That’s it for this week, everyone!