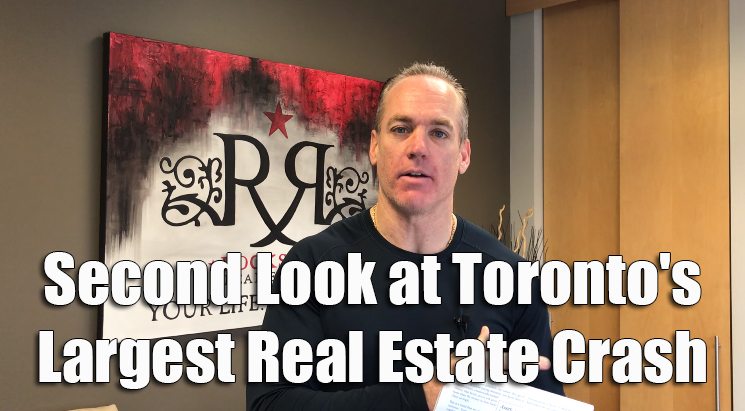 Real estate is scary business, especially investment real estate. This week we go back in time and take a look at the 1990 crash to see what we can learn and why, although scary, income properties may still play an important role in our lives...

Hey everyone, it's Tom Karadza. We're going to take a second look at the Toronto Real Estate Crash. We did this a long time ago, but we want to go back with some different charts. The reason that we're going to do this is that we saw a headline in The Financial Post yesterday. I'm not sure if that's going to come up for you or not, but it says ‘Is Canada's Middle-Class Shrinking or Does It Just Feel That Way?’ And the quote that bothered me, here’s what it says, “A recent poll suggests fewer than half of all Canadians now identify as members of the middle class.”

The middle class in Canada is being destroyed. The only two ways we know to circumvent this trend is to get yourself some hard assets like good income producing properties, or start your own small business. We're big believers in both strategies, but one of the things that keeps people away from real estate is they're always worried about a crash so, we just want to dive deep into this and let's go back together and look at the biggest Tronto the real estate crash so we can learn from it.

So, we're going to switch my desktop here and we'll analyze that right now.

OK so let's bring up a chart here of the average Toronto MLS sale prices going all the way back… this one goes back to 1971, and let's take a look at the biggest crash in Toronto's history on this bar graph to see what we can learn.

If we look right around 1989-90, you can kind of see the peak of prices during that period, and if we drop a couple lines from the top to kind of the bottom where it looks like the prices leveled off in around 1996. So, they came kind of to the bottom around 1996, and if we just draw a couple lines there, the price difference from peak to bottom is 27.6%. So, kind of interesting. Just a point of interest to know that from the very top, if you bought really at the peak to the bottom that's where prices fell. And what's also interesting is that if you did buy in 1987, only a couple of years before the peak, prices really only went back to the price levels about two to three years before the crash happened. And then it took about six years for the prices to really bottom out. And what was happening. I mean I was fairly young back then. But during that period when our family was going through some of this stuff, I can remember that people thought every year things were getting worse, so people were selling properties because they thought things will get worse and worse and worse and it took about six years for things to bottom out, and it looks like on the average it took another six years for prices to regain to the point that they were at before the crash.

So, a total of a 12-year experience that you kind of had to survive through, and a 27.6% drop. So that's kind of the biggest drop in Toronto's history.

I'm pretty sure it's the biggest drop in Canada's history gives us some kind of an insight of what's happened in the past and perhaps what may happen during another crash in the future. Who knows. We don't have the crystal ball.

What's interesting is if we look at U.S. prices now, we can kind of look at some of the same data. If we look at the bottom and then go back to where prices peaked in 2006-2007 we can see that it also took six years from the top to the bottom, which is kind of interesting. Totally different time period, totally different country. But it also took six years for prices to really hit the bottom. It was also a 27% decline on average.

So, the biggest point with all of this is that these are averages. This changes community by community and a lot of communities were not nearly as affected as the average prices were and some were more affected. So, this is just giving us some insight. But real estate is a very community-centric thing. And prices also went back to the price they were… it looks like about three years before the crash. And it took another five years for them to recover with all the stimulus that the U.S. put in to try to get the prices to come back up. So that was a total 11-year experience.

Two different countries, two different crashes entirely, but a lot of the data points surprisingly are rather similar in these experiences.

So, there you have. OK. So, as scary is that some of that data might have looked, we are still big believers in good income producing properties and part of the reason is, I'm not sure if you're going to see this report very clearly, but we gather some stats Canada data and mapped income levels against property prices, like hard assets, in Canada. And you can see the two diverge. If you want this data by the way, you can get this report and we have some golden horseshoe density reports charts in here as well. You can grab that at nomoremiddle.com. So that's www.nomoremiddle.com. And the idea is that if you don't own hard assets, or you don't create yourself a good small business, incomes alone are not going to keep you in the middle class. The middle class in Canada is being destroyed. And that's exactly why we're sharing a video like this, putting some data together like this so we can all analyze it and make good decisions for ourselves and our families moving forward. So, hopefully you've found some value in this video and if you want some more information you can grab this report at nomoremiddle.com. Until next time, your life. your terms.