Will the U.S. Raise Rates & Will Canada Follow? (2 Charts) 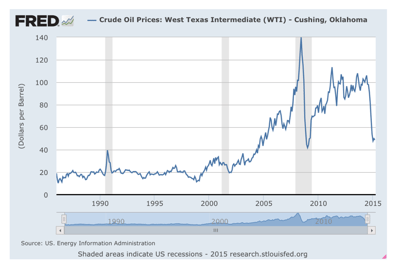 Yesterday we read this line in an article on the Financial Post’s website, “The Federal Reserve will raise its key interest rate as early as June” (Source)

So is this a done deal?

Is the U.S. going to finally raise its rates?

Will Canada then be forced to follow shortly afterwards – as usual?

Or is the media smoking something again?

Over the last few months we’ve shared all sorts of charts around employment, housing, mortgage delinquencies and more but it seems over the next few months we’re coming to this amazing climax where someone breaks.

Either the Fed, led by Janet Yellen, raises rates or they blink and hold off – yet again.

On the one hand…

If they raise rates they risk the U.S. dollar strengthening even further which we don’t believe they want because it hurts their manufacturing and export sector.

On the other hand…

If they don’t raise rates the entire world may do a collective head scratch and wonder if they ever actually can – throwing everyone and everything into an ever-growing-easy-money-bubble-party.

Do they raise rates a teeny-tiny-little-bit to make for good headlines and then pause there for a long while.

Oh, the confusion of it all!

And the fun of it all!

These are truly historic times that all of us money geeks will be talking about for decades.

Books will be written, courses talk and lectures after lecture held about the Fed’s greatest money experiment of the years 2008-20xx?

There’s an article from the CBC.ca a few days ago with this in it:

“The U.S. Federal Reserve is giving “serious consideration” to beginning to reduce its accommodative monetary policy and a rate hike may be warranted later this year, although a downturn in core inflation or wage growth could force it to hold off, the central bank’s chief said on Friday.—

Fed Chair Janet Yellen said that after the first rate increase a further, gradual tightening in monetary policy will likely be warranted. If incoming data fails to support the Fed’s forecast, the path of policy will be adjusted, she said.”

And this next paragraph is our favourite:

“With continued improvement in economic conditions, an increase in the target range for that rate may well be warranted later this year,” Yellen said in prepared remarks at a monetary policy conference at the Federal Reserve Bank of San Francisco.

Yellen added that the timing and the path of a Fed hike would depend on the incoming economic data.”

So we’re not trained economists, actually, we’re far from it.

We’re the children of immigrant parents who grew up on construction sites, went University and College, worked in the software/IT industry and then somehow opened a real estate brokerage.

But if we’re to take Janet Yellen’s comments above seriously then we’ve got to ask:

Exactly what freakin’ data is she talking about?

Median family income is not up.

The unemployment rate is only doing great because they’re not counting millions of unemployed as illustrated by the U.S. labour force participation rate.

Inflation, as the governments choose to measure it, is not up.

So what data is she talking about?

We’re being serious, are we missing the obvious or is it just so obvious that the mainstream media doesn’t get it?

Check out these two charts:

That’s the price of oil.

But maybe to a trained economist, it looks like a beautiful sign of an economic spring unfolding.

We’re not sure … because to us that oil chart looks like its very far from signalling inflation or an economic recovery (we are aware of the geopolitical aspects to this as well of course). 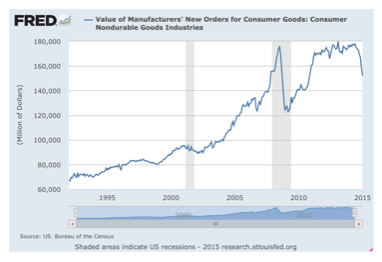 That’s the value of new orders for non-durable consumer goods.

When you study economics at University is this a sign of an economic recovery?

Who knows, maybe it is!

It looks more like the easy money policies artificially propped that up for a few years and now there needs to be more punch added to keep the party going.

So if Janet Yellen is going to look at the data to decide what the Fed is going to do with interest rates then we’d love to know what data she’s looking at.

And why the media just takes her on her noncommittal but very serious sounding word that rates are going up.

Here are our deepest fears:

1. The U.S. Fed doesn’t have a clue as to what they’re doing.  They may raise rates this year for the sheer optics of it and it may crush the week economy because they are unable to read their own data like we can 😉

2. We’re in the middle of a currency war that really got heated in 2010 and hasn’t stopped – and that we’re entering a new phase of faster and increased volatility in things like commodities/oil, national interest rates, property/land prices.

We think things are going to get a lot crazier before we’re on a more even course economic course again and that it’s in our own selfish best interests to keep very aware of what’s going on.

Fun days ahead for sure.

In the middle of all this economic madness make sure you’re enjoying yourself!

Share this post
FacebookTwitterGoogle+LinkedIn
Related posts
The Books That Helped Shape Us and Changed Our Lives
March 26, 2020
How to Ensure Repair Work Gets Completed Before You Buy Income Properties
March 11, 2020
why Canadians can’t get ahead with income alone…
March 4, 2020
this is how money is really made…
February 27, 2020
Living Through 30% Annual Inflation in Argentina & Immigrating to Canada, Investing in Duplexes & Living Life on Their Terms
February 24, 2020
Latest Ontario Population Data a Perfect Storm of Opportunity
February 20, 2020
4 Comments
Leave Comment