Are These the Thieves Conspiracy Theorists Are Looking For?

Home / Business Lessons / Are These the Thieves Conspiracy Theorists Are Looking For? 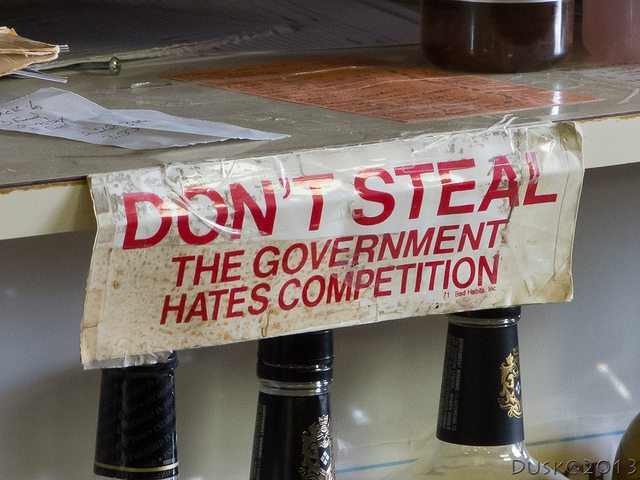 The other day my 12-year-old son asked me about conspiracy theories.  He seemed intrigued about a group of people that may control the world.

And it is intriguing.

I mean even though we all knew those Tom Hands Da Vinci Code movies got horrible reviews we still watched them.

Over the years many of our own backyard BBQ parties have ended with debates around who is pulling the economic strings of the world.

It’s fun to talk about this stuff, at least it’s fun to us. 🙂

But what if there really is a group of people who control the economic world?

And what if they’re hiding in plain sight … so much so that you can’t even see them?

Stick with us here for a minute.

What if there was a group of people making a killing on their investments with almost no risk?

What if they were allowed to do this with almost no money?

And what if all their money making was at the expense of the common man/woman?

Well, in our opinion, there is such a group.

Here’s our understanding of how they work…

There’s a group of banks that are allowed to borrow from the Federal Reserve Bank in the U.S. called “primary dealers”.

You can check out the list the primary dealers right here.

And what if these banks could borrow money from the Federal Reserve at 0%?

The Federal Reserve has currently been handing out money at 0% as its economic strategy.

The write all about it on their own website right here.

And what if these banks, who can borrow at 0%, take that money and instead of lending it out, invest it in U.S. Treasuries at 2%?

And it’s risk free because Federal Reserve has promised low rates and kept that promise for years now.  They even hold press conferences giving these banks a heads up on their decisions.

But maybe it gets even better.

How could risk free investing get even better you ask?

Well what if through the powers of fractional reserve banking they could leverage this and invest their money 10 times over?

Let’s all start a bank and cozy up to the Federal Reserve!! LOL.

And why is the Federal Reserve lending out money at 0%?

Well, that’s easy, to save the same banks who are borrowing the money from going bankrupt after the sub-prime mess in 2007/2008.

Get saved by the Federal Reserve.

Then borrow money from the Federal Reserve.

And make lots of money.

Now so far this is amazing right?

By doing this they are effectively stealing from everyday savers and everyday fixed income earners who depend on interest as an income source.

So instead of savers and investors earning a decent amount of interest on their savings the Federal Reserve is in effect taking that interest and paying it out to the banks instead.

But it is what it is and I don’t think two brothers from Toronto who grew up in Mississauga and now live in Oakville are going to change their minds on this strategy.

OK, now back to conspiracy theories…

If this is really going on shouldn’t we all know exactly who runs the Federal Reserve?

We think that would be a great idea!

So here’s our quick summary of our current understanding (and a big shout out to all the authors, bloggers, podcasters and tweeters for sharing all of what we’re about to summarize):

2. These district banks are privately owned by commercial banks in that area (from we understand, it’s not like its listed out clearly).

3. The big president in chief of every district is elected by the private banks in that district.

4. The twelve district banks report to the big Board of Governors in Washington D.C..  You can check out the members of the board right here.

5. This board selected and then approved by the U.S. Senate.

6. Interest rates are set by the FOMC, the Federal Open Market Committee, which is a mix of Governors in Washington and several district bank presidents.  You can see the current committee here.

7. The Chairman of the Federal Reserve, currently Janet Yellen, is the one we all see on TV explaining their magical rate decisions while getting “grilled” by the U.S. government about them.

It’s quite funny to hear these Chairmen explain simple economic conditions with so much mumble-jumble and verbal diarrhea that even they seem confused when speaking.

Personally, I quite enjoy the art of it all.

Again, we’re not judging here, but this is quite a good deal is it not?

Seriously, please let us in on the game Janet!  We want to “invest” in such a “risky” way too!

Anyway, there you have it.

If there is a conspiracy theory maybe it’s that these guys hide in the open so well that we’d rather watch Tom Hanks find Da Vinci clues in Paris than listen to Janet Yellen talk for thirty minutes.

Today’s state of the world is making some of these banks quite a lot of money while forcing common investors into riskier and riskier assets in hopes of a return.

This is a massive wealth transfer from the bottom to the top.

And in our humble Canadian opinion, setting us all up for a massive bust.

The timing of that bust is anyone’s guess but this can’t end well.

It’s part of the reason we currently only like assets where we have full control.

Anyhoo, that’s a conversation for another day … gotta run and meet a plumber out at a property.  Apparently some real diarrhea is causing some pipe problems for us 😉