Real Estate is in a Bubble & You Should Buy Some

The other day someone we know got offered a 5-year fixed mortgage for 2.79%.

How times have changed.

It was 4-bedrooms with a two car garage.

This was about ten years ago.

About 8 years ago we bought our current home for $408K.

At the time I thought we were crazy.

Today the same home would sell for approximately $850K.

It’s more than doubled in 8 years.

Some larger houses in the area that were purchased for $600K around the same time are now selling for $1.5 Million.

There’s no doubt in our minds that real estate is in bubble territory.

But the fact remains that with interest rates as low as are these high prices are a natural occurrence.

Central Banks, to us, seem to be in the business of creating bubbles … it’s almost like that’s what they’re best at.

If interest rates were to rise prices of higher end homes woud get hit pretty hard.

There’s no doubt in our mind of this.

In fact about 20 years ago our father was flipping a home that he purchased for $750K … it lost $300K in value in four months after interest rates rose 2.9% in a single month.

So we’re feeling pretty confident that if rates were to rise … prices would fall.

And they would fall enough that the media would scream “Real Estate Bubble Finally Pops in Canada!!”.

The Bank of Canada would scream that they told Canadians to be more careful.

Banks would scream that none of this is their fault, they were just trying to offer competitive mortgage products.

The irony in all of this would be that the Bank of Canada and the Canadian Banks are the ones creating the bubble that would pointing the finger to us … the average Canadian … for causing.

And they’re not going to take any.

When it happens it will be your fault – right or not.

1. Although we’ve all be threatened with higher interest rates for at least 3 years now – nothing has changed.

2. In fact, low rates are here to stay.  No matter what the U.S. Fed threatens or hints at … QE is here to stay.  There’s no way out.  (the only way rates rise is if there’s a very sudden and global loss of faith in the U.S. Dollar)

4. Today’s environment has left people who save money in bank accounts and who are trying to live off “fixed income” investments in a brutal – and unfair – situation.

The Canadian Banks are offering 1.35% for GICs right now.  So if you saved your whole life and put $1 Million dollars away for retirement you would be forced to live off of $1,125 per month.

Even Warren Buffet feels sorry for these people … nice huh? 😉 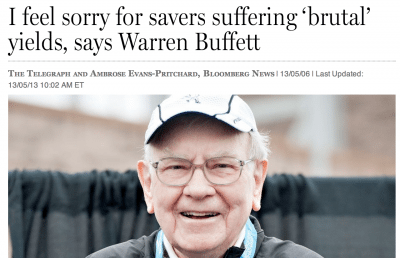 So with real estate at such high prices what’s one to do?

We think you should buy some!

But not the kind you live in.

We’ve dug up the “carry costs” of properties in communities outside of Toronto and found that the percentage of income needed to carrying the mortgages on these properties are at historically average levels.

Unlike Vancouver and pockets of Toronto people actually don’t need to spend more that 40% of their income to carry their mortgages.

And if we can rent those places out to carry our costs then we’ve found some winners!

1. We’re in “hard assets” that are “productive assets” … meaning they pay for themselves!

2. We’re out of the financial instruments that pay next to nothing.

3. We don’t have to care about the swings in prices … as long as income is greater than expenses we’re happy!

4. When Japan’s stock market goes up and then swings down hard (see headlines in today’s Financial news) … we don’t have to care!

5. We’re able to leverage our money, secure low interest rates which means our principle builds up fairly quickly and control asset that pay for themselves.

Now, we’re sure there are many people who won’t agree with us and give us all kinds of reasons why not to buy properties right now.

But if you buy them smartly, in the right areas and can secure low interest rates and good revenue from them … we’re fans.

There are negatives of course … you need to deal with tenants, issues that pop up at the worst times and it can be generally stressful.

But the long term positives easily out weigh these short term negatives for us.