Staying On The Side Of The Minority | Rock Star Inner Circle

Maybe Canadian Interest Rates Are About to Shoot Up – Way Up?

Home / Real Estate Investing / Maybe Canadian Interest Rates Are About to Shoot Up – Way Up? 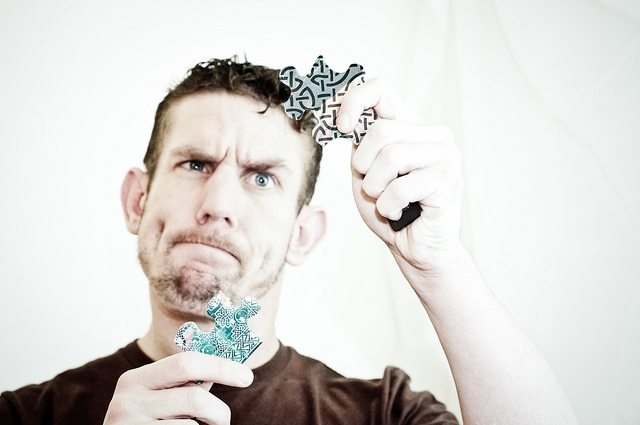 Whenever we find ourselves on the side of the majority we freak ourselves out.

For some reason, it gives us comfort to be on the side of the minority.

So over the last six years when the vast majority has been telling us interest rates would be going up shortly, we felt comfortable in our beliefs that they wouldn’t.

But today the tide has turned on us and we don’t like it!

Now, all of a sudden, Canadians are feeling that interest rates are going to stay low and they’re going to go even lower.

Quick Aside:  Could imagine seeing 1.75% variable rate mortgages in our future?  What would that do to real estate?  Wow.

A year ago, we would have been the ones proclaiming this very thing.

That rates are going lower no matter what anyone says.

And that very straightforward analysis of the economy says they cannot go up.

But today, because the media itself is throwing these “low rates forever” ideas around, we’re beginning to have second thoughts.

How can it be that our thinking and the mass media’s would be on the same page?

Are they just catching up to the idea that currency wars around the world are in full swing?

Or is it time for us to question our own beliefs?

Luckily, we all have access to some very insightful data that we can test our thinking against.

First, here’s the velocity of money chart from the St. Louis Federal Reserve. 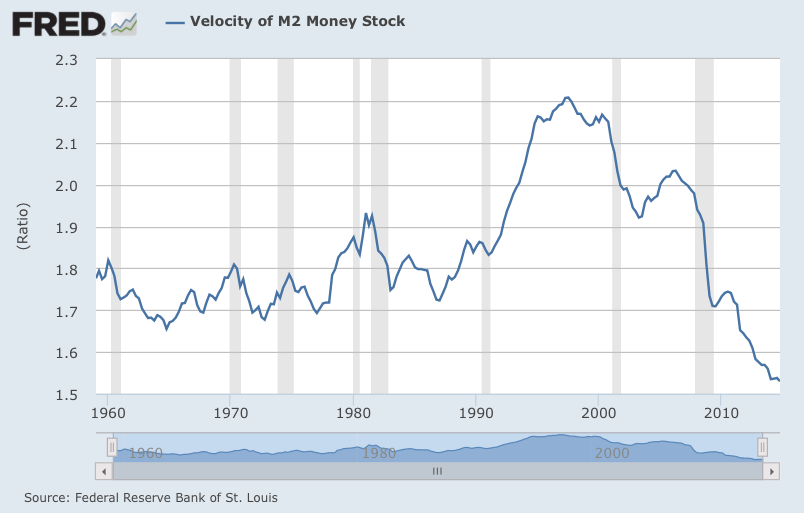 The velocity of money is a measure of how frequently money exchanges hands.  In a very healthy and strong economy, this tends to increase.

And as we can all see, the above chart isn’t increasing.  In fact, it’s quite horrible.

Pretty soon it’ll be so low that it seems we’ll all be stuffing money under our mattresses and hoarding it.

For those of you new to this blog, we watch U.S. data closely because it gives us big clues as to what actions the Bank of Canada will take around rate decisions. 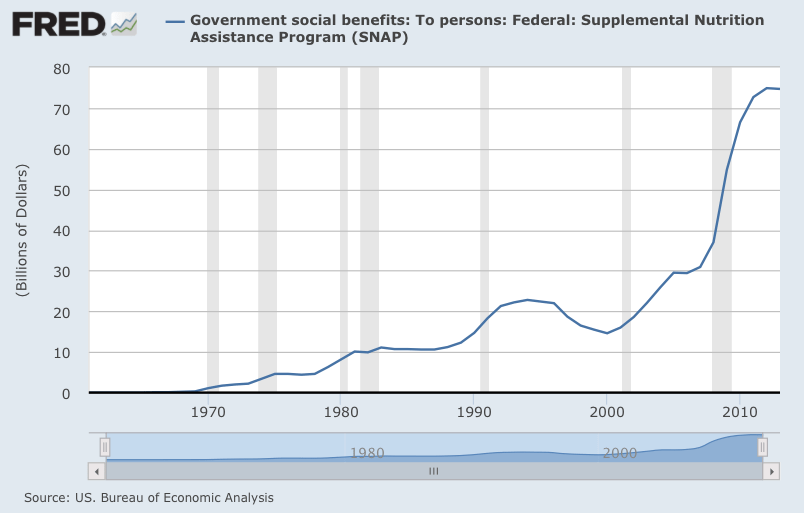 From our understanding that’s the amount of money that the U.S. is spending on food stamps.

So although we don’t see the lines of people standing in the streets like in the 1930’s there’s obviously a bunch of people in need.

And it seems like the number must be huge for that chart to look that crazy.

This next chart is the one we would really like to see turn around: 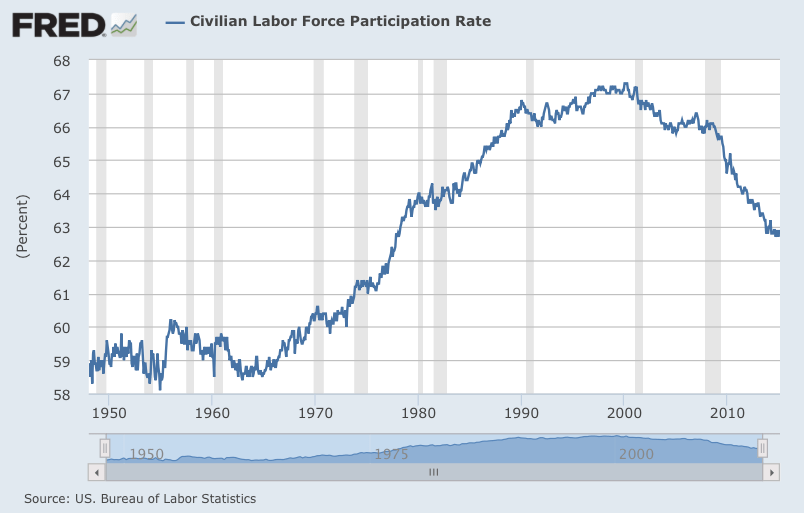 This is the U.S. labour force participation rate.  No matter how low the unemployment rate is reported to be it sure seems that a lot of people aren’t working based on this data.

Another sign to us that not all is healthy with the U.S. economy.

So where does this leave us?

If they did that it would put a lot of pressure on Canada to do the same.

We don’t have a magical crystal ball but based on this data we think that:

A) They blink and change course – not raising rates.

B) Raise rates in a very small way to make good on their promise and then quickly reverse course when that move crushes any economic growth that is taking place.

So maybe low rates are here to stay forever after all?

We’re more nervous than ever about it.

It seems that we have to prepare for inflation (think real estate), watch out for the active deflation at play (think oil) and invest with both of these things going on at the same time.

It’s crazy and fun all at the same time!

Interesting times and we can’t stand still through all of this.

Having an information advantage is the only way we can sleep at night so we’ll keep digging!