Are We In A Housing Bubble? | Rock Star Inner Circle 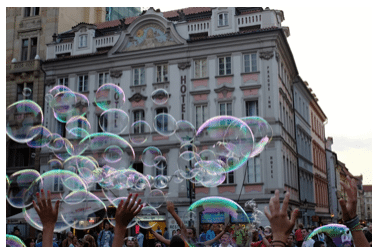 A friend’s dad is convinced there is a housing bubble in Canada.

At some point, he’ll be right.

Unfortunately, we live in a world where true price discovery of real estate is not possible.

It’s actually a disservice to yourself and to your friends to walk around talking about prices being in a bubble without having the proper context.

We live in a world of artificial price movements.

We all wait with bated breath for what the Bank of Canada announces next.

Will they raise interest rates?

Will they make mortgages harder to qualify for?

Is there a bubble?

Is there no bubble?

News headlines are useless.  Because every city, community and even intersection across Canada is uniquely different from another so there’s no single answer.

Instead what we do know is this:

There is a massive global fight going on since 2008 … pitting country against country … to grow its economy in a slowing global marketplace.

And for this reason, no matter what happens with prices in Toronto, Calgary or Vancouver; Canada’s hands are tied tightly when it comes to rates.

The government will not and cannot raise interest until the economy picks up some serious steam.

Canadian real estate prices are perfectly reflecting the conditions of the moment.

All the charts showing how much debt Canadians are accumulating are useless analysis.

Granted, as a country, our population has too much debt but who can blame them?

The policies in the economy don’t encourage anyone to save.

Are you going to save money in a bank account that pays out 1.3%?

When the price of food, gas, and housing are clearly going up in price much more than that?

There is no incentive to save money.

Saving money in this environment is not encouraged.

Pay off debt and save.

That’s not our world today…

It’s not our fault prices of real estate in Canada are going up.

It’s the fault of the governments around the world trying to get people to spend money with low-interest rates.

They’re warning Canadians that their debt levels are too high but they’re the ones offering the low rates.

The irony in it all is rich.

It’s flat-out fun to watch this game play out, isn’t it?

So how do you make money in this environment?

If you’re brave enough and daring enough you use debt to your advantage.

You buy smart assets and manage them carefully.

But this strategy is only for those who really believe they understand what’s going on in the world.

To do this you need to have a big context.

You’ll need to understand what’s going on all around the world to give you confidence that your 3-bedroom income property that you paid 10% more for this year than last makes sense.

We are not encouraging that strategy for you unless you know what you’re doing.

This is only for the those with a lot of guts and those who are willing to take full responsibility for their actions.

A more conservative strategy is pay off your debts, save some cash and invest in some assets outside of the financial system: commodities, land, fine art… you know, the stuff the wealthy have owned for generations.

For now, let’s all understand there’s no bubble…

And when that environment changes so will the prices.

And the prices will pop in some cities much larger than others.

It happened back in 1990 and it’ll happen again.

You can make money in this environment … just understand what you’re doing and why.