Feeling Poorer? It’s Not You … It’s This 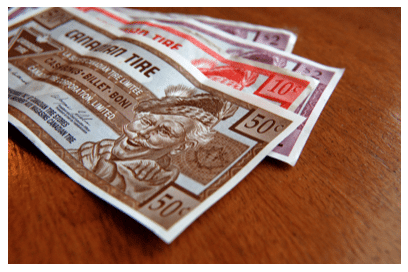 Those pesky central bankers are at it again.

They just won’t raise interest rates, will they?

The threats of higher rates have even disappeared … which is scary in and of itself.

To many of us, the idea of “inflation” is a foreign concept best ignored.

Even Henry Ford, many moons ago, recognized how inflation and our current money system was, how can we say it … benefited some more than others:

“It is well enough that people of the nation do not understand
our banking and monetary system, for if they did, I believe
there would be a revolution before tomorrow morning.”
– Henry Ford

But ignoring a problem isn’t always the best strategy.

We all know that right?

So let’s look at how inflation has been making all of us just a little poorer.  Check out this chart published on mybudget360.com: 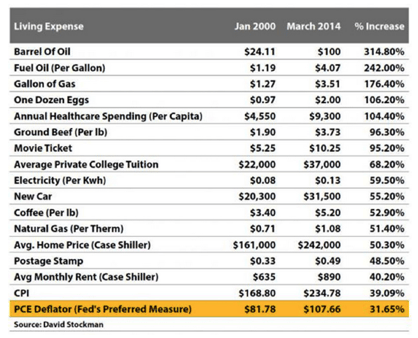 And why is this happening?

It could have a little something to do with this… 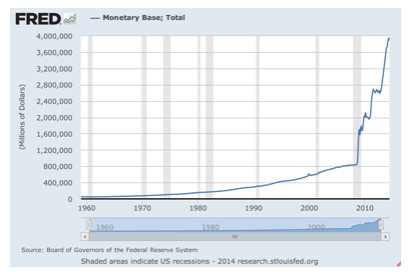 To save the banks, governments have been printing a lot of money.

And why did the government save the big banks?

Because the central banks said we should.

And who sits on the board of the largest central bank in the world?

People nominated by the banks.

And it gets better…

Back in 1980, our father was making good money as a drywaller.

There was a rumour that in the 1980’s he was the best drywaller in all of Toronto.

That’s how the Karadza family legend shares the story anyway.

We went on family vacations, we had bikes, Nintendo’s, went to Europe a lot … good times.

Now today, for our father to make the same money as a drywaller how much do you think have to make in 2014 dollars?

Well, thankfully the Bank of Canada has a little calculator that will tell us: 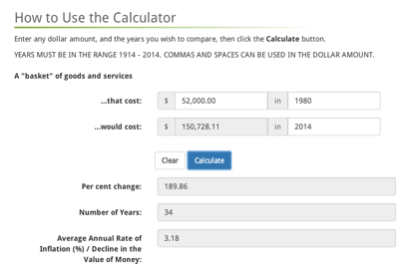 Can you make out those figures?

He would have to make $150K today.  How many drywallers, even the best ones, are making that kind of money today?

Is it any wonder why our dollars don’t “feel” like they go as far as they used to?

The current monetary system is designed to steal the value of our dollars via inflation.

This isn’t some conspiracy theory … this is FACT.

And this affects a lot of stuff…for example,

Let’s say you decide to save up $10,000 today to put towards your 5-year-old child’s education.

Not very nice is it?

And what about retirement?

It’s part of the reason I cashed out my RRSPs, bought income property, started our own business … took some sort of action … I like to have control over my own life.

Personally, I don’t like it when I feel the rules of the game are set up against me.

And from our viewpoint, the rules of the game are very strange.

But there is good news…

Once you understand them you can set yourself up in the best position possible.

Learning how the money game is played is some of the best, most liberating knowledge you can give yourself.

And knowledge isn’t destroyed by inflation 🙂