Is Debt The Only Way Left to Get Rich? | Rock Star Inner Circle

Is Debt The Only Way Left to Get Rich?

Home / Real Estate Investing / Is Debt The Only Way Left to Get Rich? 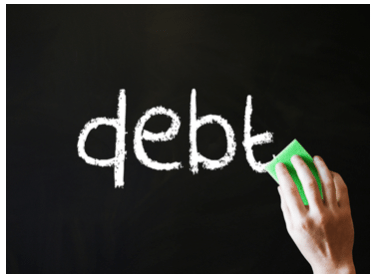 Everyone’s got an opinion on how to get rich.

And whenever you talk about “getting rich” or “making money” the discussion of stocks and real estate booms and busts inevitably comes up doesn’t it?

You’ve got the stock guys.

And then you’ve got the real estate guys.

Our friends who are in the “stocks” camp will always tell us about how the real estate market is in bubble territory.

Our “real estate” friends will always bring up Nortel and the NASDAQ and the tech crash that wiped them out.

These discussions aren’t particularly helpful to us…

We’re more into figuring out what policies are currently being used in the financial system by the power elite and riding on their coattails.

And for us it’s very clear.

Loading up on debt is the way to go.

Now, stick with us here because this is dangerous talk and a lot of people will hate us for speaking our minds like this.

Our studies have made us believe that there is a structural problem with the economy.

How can it be that we have low interest rates for 5 years and there’s no big recovery going on?

In our eyes we’ve hit the debt wall.

New spending by government isn’t helping the economy the way it used to.

In fact, it’s barely helping it at all.

The stock market is doing reasonably well but we, personally, don’t have faith in it for many reasons.

How is it that the U.S. stock market keeps plodding along while there are 50,000,000 people down there on food stamps?

Isn’t a roaring stock market the sign of a recovery?

What kind of recovery has 50 Million people on food stamps?  Seriously, think about it.

Friends of ours in the U.S. told us that their neighbourhood Walmart has parties at midnight with bands and balloons for the kids on the last day of the month to attract shoppers right as their food stamp swipe cards get auto-reloaded at the stroke of midnight.

So here’s our view of the world:

Governments can’t admit it but they’re full of debt.

And they have no way to pay off this debt other than raising taxes (see this Japan article) or trying to artificially make the debt look smaller by inflating the economy with low interest rates.

This means they’re going to try and use more debt to grow the economy.

They’re going to try and use debt as a policy tool.

Because if they can try and inflate the economy to look bigger with inflation and higher prices it will create a bigger looking GDP, then the debt looks smaller as a percentage of that GDP.

And we’ve convinced ourselves that we have years of this mess ahead of us.

And because we’ve convinced ourselves of this we’re comfortable using good debt to buy good properties on the fringes of the GTA … so not the $780K 3-bedroom home near Danforth & Pape but the same looking 3-bedroom home in Hamilton for $300K.

And if we can rent these properties out to cover our costs and even leave a little extra then we feel we’re using debt and the current low interest rates to our advantage.

As the use of debt grows our wealth grows with it (or at least our wealth is maintained).

But if we’re saving money in the bank then our wealth gets destroyed with these policies.

Again, this is dangerous advice and not right for everyone.

Here’s some food for thought before you rip our heads off in disgust at this type of talk:

1. The mortgage arrears rate is trending pretty low in Canada.  So if we ignore the headlines and just look at the data we don’t have a leading indicator of defaults happening in Canada right now.

2. When our parents were paying off their mortgage in the 1980’s this advice didn’t make sense (to use debt to your advantage) because interest rates were being used in the opposite direction.  They weren’t low, they were super high: 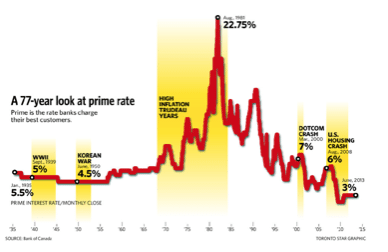 3. The media will always parrot whatever the Bank of Canada and the U.S. Federal reserve says so you’ll hear how “low rates are ending soon” more often than not … but the media isn’t thinking critically, they’re simply reporting.  They’re just repeating statements spoken by people that don’t want to tip their hand.  Can you imagine the Bank of Canada coming out and Tweeted this:  “O-M-G, this is a mess, we don’t know what to do so it’s low rates forever”.

So if we can be smart about our use of debt and buy assets that pay for themselves then we feel we’re riding the wave of economic policy pretty smartly.

We’re using debt to our advantage just like the big boys and girls.

Low rates will not be around forever so we have to keep a careful eye on things and prepare to control our costs.

Our variable rate mortgages won’t look so pretty when rates do shoot up so we have to be ready to lock them in for as long as possible or even lock them in now if we’re scared we won’t make the change in time.

But it likely won’t be a planned “decision” by the central banks that move rates higher.

It will be unexpected event (think Lehman 2008) that shakes the markets and rates higher – fast.

So we better stay pretty nimble and have some extra cash in the bank.

Our properties better be in good areas and better be attractive to tenants so we can continue to rent them out.

Again, this advice is dangerous and it’s seriously not for everyone.

But can we all be real about the economic situation…

Chasing strategies that worked in the 1970’s and 1980’s and applying them to a very different world today isn’t going to get you very far either.

Unfortunately we see many people not doing anything at all.

They’re not following the strategies that helped their parents (save, pay off debt).

And they’re confused about what to do today.

So they’re doing nothing because they’re confused.

Study up, make your own decisions and go have some fun!

If you think we’re way off here, don’t hold back … feel free to let us know.