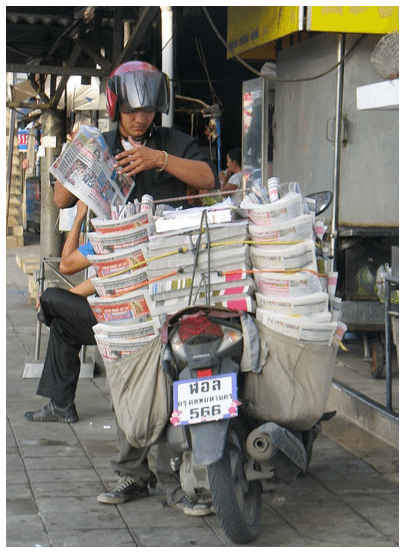 My kids are already talking about going to University.

Funny how we guide our children – almost unknowingly.

But you know what…

Although University was extremely valuable, my best “life skills” came from my newspaper route, my $3.50/hour job and moving pee.

I remember delivering newspapers to this one lady’s home on my street for several months without her paying.

There was no “auto-billing” so I was responsible for collecting her monthly fees.

She was scary.  And she was mean, real mean.

I hated going to her house asking for money.

But it wasn’t her fault that she hadn’t paid for her newspaper for two months.

At one point I got so so scared of her that I stopped asking for money but kept delivering her paper.

When the newspaper company demanded their cash for her deliveries I realized I had to go knock on her door whether I wanted to or not.

So I hesitantly walked up to her porch and rang the doorbell.

When she I answered I swear it was like the Wicked Witch of the West who answered the door – I’m sure in reality she was a fine lady – but in my ten year old mind she had the power to petrify.

I almost peed my pants, right there, on her porch.

As she slammed the door I ran home like a goblin was chasing me.

Here’s the embarrassing part – if it’s not embarrassing already – I had to get my mom to go back with me and explain that the paper was delivered and that it was time to pay up.

And then she paid, grudgingly.

I think I’m still scared of that lady today.  LOL!

Anyway, that day I learned that I was at fault.  I should have been collecting the newspaper fees every 2 weeks as scheduled.

I avoided the situation out of fear and it caused a bigger problem.

It was a HUGE lesson for me – one that has always stayed with me.

Deal with scary issues head on.

My next job was offered to me when I was buying Popeye Cigarettes from a convenience store.

The owner leaned over the counter and said, “Hey, you seem like a good kid – want to stock the shelves?”

One day in that store I recall looking for the Cream Soda in the back storage area and coming face to face with two huge rats that almost bit my face off.

Every time I had to get the cream soda I knew I may come face to face with these creatures and I hated it.

But I did it anyway.

Doing things that scare you is how you grow.

My friends would come in that store and go play on their bikes and look at me like I was crazy for working in that place.

I’m not sure why it didn’t bother me … but I felt good making my own money.

There was a sense of pride and accomplishment that came with it.

Then, my father said at the rip old age of 13 that I should quit that job and come work with him in the summer on construction.

He promptly abandoned me in the middle of a hotel construction site in Mississauga with a hard hat, a broom and a buggy to haul drywall scraps to a dump box outside.

It paid really well.  I think around $8/hour.

So I was a happy camper … until I realized something …

Although the drywall scraps were easy to pick up and dump there were other “things” that I was responsible for cleaning up.

Some of the drywall workers would not take the time to use the blue, mobile, “Johnny on the Spot” washrooms provided for them.

Instead they would pee right in the units they were working in …. in boxes lined with plastic.

They would fill these boxes right to the very top.

And guess whose job it was to remove these boxes of pee?

When I first realized this I avoided the problem for a couple of days.

After closely inspecting these boxes of pee I knew there was no way to pick them up without:

A: Spilling some on myself as I picked them up.

B: Possibly vomiting in the process.

It took me almost an entire week of avoiding the problem before I could hide no more.

So one day I carefully approached this box of nasty … picked it up … proceeded to spill some pee on my sleeves as I walked this delightful gift of pleasure to the dump box outside.

Anyway, as the years went on I continued to work with my father and every once in a while I’d go back to being the “cleaner” if no one else was around to take on that role.

But something funny happened.

As I got older I was more interested in getting the work done than hiding from the problem.

I was being paid “peicework” … meaning I only got paid for the work I completed.

So when I saw future boxes of nasty I would approach them in full stride, pick them up and toss them without giving it a second thought.

Getting the job done trumped my emotions of disgust.

When focused on bigger goals small problems are just that … small.

When a small problem is your only focus then it seems big.

As strange as it sounds it was these types of experiences that we associate with our ability to get stuff done today.

When we see people hesitate with their real estate investing because of meaningless perceived problems we get confused.

When we see people scared of doing the work necessary to create an asset that will create years of income for them – we scratch our heads.

And although University taught me a lot about critical thinking, research and supporting my arguments … I’m not convinced University is responsible for teaching me any money making skills at all.

There’s no class in Street Smarts 101.

Although I will encourage my own children to go to University I have already been explaining that their future ability to make a living for themselves has NOTHING to do with what they will learn in the classes at University.

Perhaps between classes they’ll have experiences that will serve them very well.

And there is no need to wait until graduation to figure out what makes them happy, what they want to spend their lives doing and how they want to provide for themselves.

Education can be a catalyst to their success but it’s definitely not the origin of it.

They need to look for their own witches, rats and boxes of pee to learn from.

They need to separate the idea of going to University with making a good living.

And I will NOT let them forget that.