Go Ahead & Screw Yourself: The Power of Being in a Jam

Home / Personal Development / Go Ahead & Screw Yourself: The Power of Being in a Jam 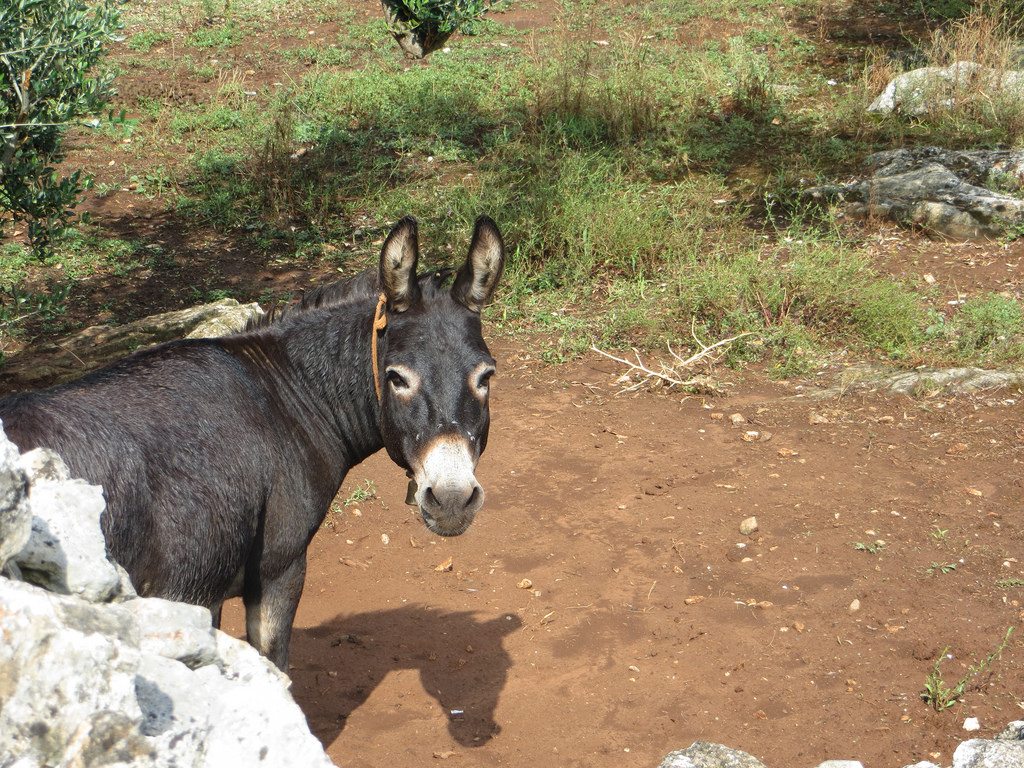 This summer, we were visiting our father’s village in Croatia, where our aunt still lives.

She’s 76 and at one point we’re convinced she was the strongest lady in Europe.

So we’re driving up the tiny one lane road to the village … because it’s a good 20 minutes off the “main” road … which really isn’t that much of a main road, to begin with.

The house that my dad grew up in is literally hundreds of years old.

For context here’s a picture of our village as we approach.

Our house has no front door, seriously… 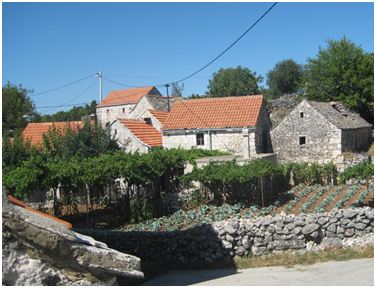 And Quick Aside: Both Nick and I visited multiple times as kids … there was no running water, no toilets, and when phone lines arrived it was a massive event – like Al Gore inventing the Internet. Oh, btw, there’s still no running water … although the neighbours now have it. We’ll let you guess about the toilets.

As we’re approaching, ashes start falling on our van.

Nick, his wife, and daughter are already there visiting with some old friends.

So we walk down the little path towards our house and my aunt is perched upon a stone ledge screaming “Vatra! Vatra!” …. (in English, “Fire! Fire!”)

There’s this decent size brush fire coming up the hill approaching the village.

It’s big enough that even more ashes begin to fall from the sky.

Nick and I examine the situation and when we see how fast the fire is jumping from one bush to the next we’re alarmed.

It was obvious this was going to be a problem.

We moved the kids and family to a safe area and starting running to the well, dumping the bucket and then running over to the fire with it.

My aunt literally threw herself into the middle of the fire and starting yelling instructions on where we should throw water.

We didn’t realize it initially, but the fire was about 75 meters from the barn that holds all the dry hay for the animals.

If that caught fire a whole year’s worth of food would have vanished.

My brother-in-law, Mario, an engineer, starts yelling that we need a “system” to dump water or this fire is going to over-run us quick.

So we collect more buckets and get Nick loading water at the well, Mario runs the water over to me and then I run into the fire with my Aunt who tells me where to throw it (she had a sprained wrist and was walking into the fire with a wooden cane – crazy, we know – welcome to our family).

Another one of our aunts was there and began teaching Nick how to flip the bucket to grab water from the well as fast as possible.

Nick was at the well because his arms are as big as his legs so we figured he could haul up water the fastest.

Each time a new bush caught fire the heat was so intense you instinctively jumped back a couple of feet and covered your face.

It was hot … and for about 15 minutes we were all pretty scared.

When it looked like it was out of control we asked our aunt to leave the village with us but when she explained about the barn full of hay we realized she’d never leave and we better get busy and fight this thing. 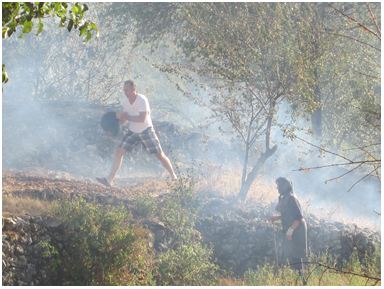 I bet you’ve never seen a firefighter wearing Lululemon shorts and flip flops have you?

Quick Aside: Remember I mentioned our aunt may have been the strongest lady in Europe at one point. Growing up I watched her carry H-U-G-E bags of hay on her back holding two at a time with one arm each. She could lift a ridiculously heavy bag of potatoes and load it on a donkey like Schwarzenegger lifting a feather. She worked hard every-single-day-rain-or-shine-hot-or-cold-summer-or-winter-forever. When Nick and I think of hard work with think of our father, our mother and our aunts … they worked, they hustled … we have it EASY.

Anyway, back to the fire…

With the new system we had in place we managed to hold the fire in place somehow.

Breathing in smoke and ash was not fun but there were no options.

Our Aunt, Teta Vera, wasn’t leaving the scene … so neither were we.

My brother-in-law wasn’t (when he took off his Prada sunglasses and set them down on a stone … I knew things were getting serious!)

Nick wasn’t leaving … at one point he yelled to me to take the kids and women in the van and leave the village … and that he was staying with our aunt.

Once I knew the family was a safe distance away … I wasn’t leaving.

It was game on.

And after doing this for 90-minutes the Fire Fighters FINALLY showed up.

I will NEVER forget that feeling of fear … for a few minutes … when I thought the whole village might actually catch fire and that we should leave.

I was scared. I think we all were for a brief moment.

The wind just kept pushing the fire faster and faster towards us.

Anyway, we won, the fire lost and we celebrated.

Why is this post titled, “Go Ahead & Screw Yourself”?

Every time we’ve accomplished anything of value, that was outside of our comfort zone, we were in a position where we had no options.

When Nick and I quit our jobs to go full time into real estate there was a point where we had no revenue for about 60 days … it was scary … but because neither of us had jobs we had no options.

Nick was married, I was married with two kids. There were mouths to feed.

The only thing we could do was push forward, keep working, keep trying, keep believing.

And we did, and the tide turned our way.

When you have your first rental property and you get that very first call from a tenant with a problem.

You have no options … you MUST deal with it.

And things get done. You solve the problem.

And years later you’re happy you did and wealthier for it.

Our aunt has had very few options in her whole life. It’s either feed the cows at 5 am and then plant potatoes all day or no one eats in a few months.

We believe, that in general, we have it easy growing up in Canada.

If you want to accomplish a lot and you’re frustrated at your pace then go ahead and screw yourself.

Put yourself in a position to get more done.

Each week Nick and I MUST write an article or three for our newsletters, this blog … we’re screwed, we have to do it.

And this blog and our newsletters have been huge sources of businesses for us.

Each September we MUST deal with out of control parents who call with tiny issues about our Student Rental properties … we’re screwed – we have to deal with it (or at least have systems and processes for it).

Now, don’t go and quit your job and do anything crazy.

What can you do?

What position can you put yourself in where you absolutely MUST get something done … not once, but regularly?  Every week.

Because if you find it you may be AMAZED at how much you get done.

You’ll blow yourself away with what you can do.

We all have more in us than we want to admit.

So come on … go and screw yourself.

(Note: this article was originally published in 2012 and we enjoyed it so much we had to share it again!)